NCAA President Mark Emmert recently indicated the association’s new charter ought to focus heavily on diversity, equity and inclusion. But while recent college sports trends lend to optimism the body can achieve this, it currently is no better than the numerous other U.S. sports with a heavy race and gender imbalance.

As March Madness tips off, the best athletes in college basketball will be on the floor—and as a group, they will be diverse, as historic barriers to playing opportunities connected to race and gender continue to be brought down.

Unfortunately, the same can’t be said about the coaches on the sidelines and the administrators in athletic offices on campuses across the country. In 2022, the state of diversity in college sports leadership is nowhere near where it should be.

Many powerful people across college sports—including school athletic directors, university presidents, conference commissioners, and National Collegiate Athletic Association (NCAA) president Mark Emmert—have publicly acknowledged a need for more equitable hiring practices and outcomes. Yet those same people have not, as a group, made significantly more diverse hiring decisions. Progress has been slow and challenging, and in most cases, the new bosses look a lot like the old ones.

As is the case with other sports entities, the diversity of the athletes in college sports creates expectation for leadership that is also diverse. Is there a better path to that? Everyone who cares about this topic assumes one exists, but no one has figured out exactly what it is.

In truth, the best route to more diverse leadership is most likely not a single strategy, but rather a combination of them.

College sports are in a revolutionary moment. Old shibboleths, particularly the ones around amateurism, are being discarded. The NCAA is reexamining some of its fundamental ways of doing business. Lawmakers and litigators alike are forcing change. Conversations about economic, social, and racial injustice that were once on the margins of the enterprise have moved to the center.

This shift is creating room for experimentation: college athletes are now free to profit from their names, images, and likenesses, and also more free to transfer among schools. Perhaps this spirit of trying new things can inform leadership diversity efforts, too.

The West Coast Conference (WCC) has adopted a form of the National Football League’s Rooney Rule that it is calling the “Russell Rule,” named after basketball legend and University of San Francisco grad Bill Russell. Requiring a diverse slate of candidates for coaching and administrative hires is a good start, and other conferences would do well to follow the WCC’s example. However, we have learned from the ebbs and flows of diverse head coach hiring in the NFL over the last two decades that such rules do not guarantee diverse hires, nor greater diversity in the aggregate.

Do diverse people hire diverse people? Is having more diverse leadership part of the solution to having more diverse leadership, creating a virtuous circle of opportunity for people who have been mostly shut of those roles for decades? Our Global Sport Institute Field Studies on Power Five conference head football coaches, athletic directors, and women’s basketball coaches do not provide definitive evidence that this is the case. But anecdotal evidence such as the recent history at Temple suggest that there is a positive effect. So do studies of diverse hiring by women leaders conducted by Dr. Nicole LaVoi and the team at the University of Minnesota Tucker Center for Research on Girls & Women in Sport.

The NCAA is a vast and sprawling patchwork of divisions, conferences, and individual schools. Outside of not paying college athletes, it has a hard time reaching a strong consensus about almost anything. So a national Russell Rule is likely not on the table. Still, the association’s decentralized nature—and currently weakening power—can be an asset. In college sports, there is much more opportunity to innovate around leadership diversity, for stakeholders to go down many paths in order to learn what works best.

While discussing the NCAA’s new constitution, a document that will empower schools and conferences to make more of their own decisions, Emmert recently said that diversity and inclusiveness are at the core of what college sports should strive for. To create appropriate levels of diversity, equity, and inclusion in leadership, much more innovation and action is needed. 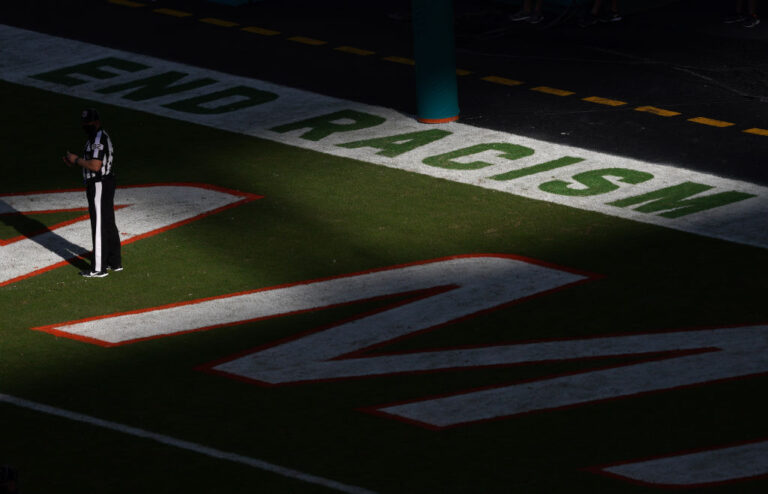 Shropshire: In the NFL, Simple Justice Will Not Be Enough