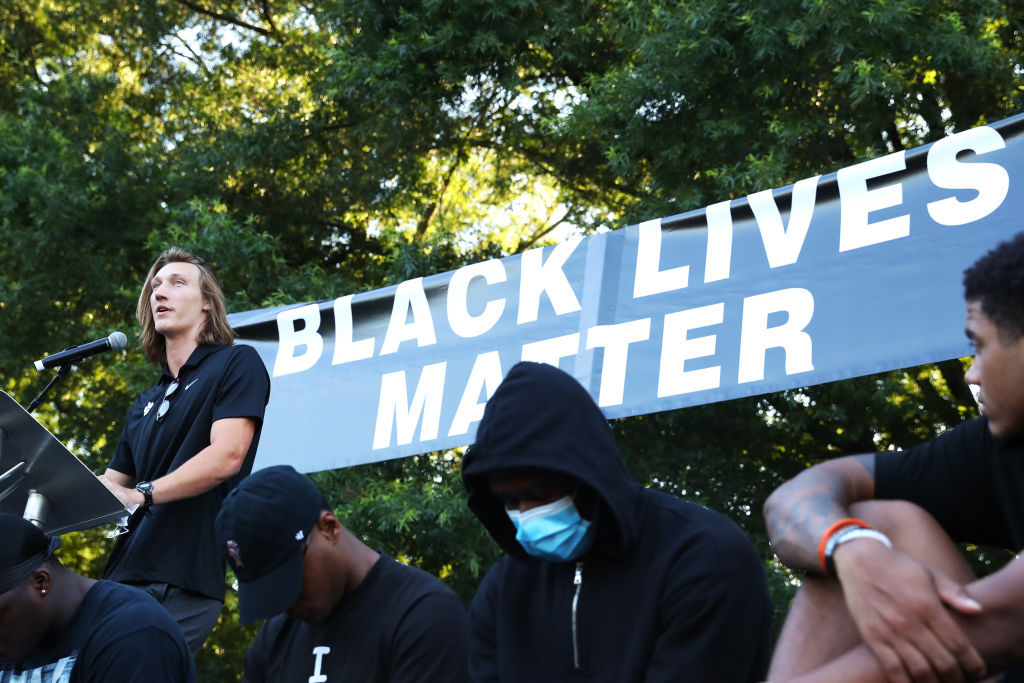 The Follow Through: From NCAA Conference Statements to Action

How have NCAA conferences responded after George Floyd’s death?

In the days and weeks after George Floyd was killed by police in Minneapolis on May 25, 2020, prominent sport organizations, including college athletic conferences, flooded their websites and social media feeds with statements and commitments against racial injustice. Such actions might seem ubiquitous now, but they signal a new kind of response. Nike was largely praised for taking a bold stand when the company released a controversial new “Just Do It” campaign with Colin Kaepernick in 2018, more than two years after Kaepernick first knelt for the national anthem at NFL games. In today’s social climate, the public could perceive withholding publicized support for racial justice as an even bolder statement in the wake of events like Floyd’s killing. A lot has changed in five years.

Regardless of how much an organizations’ public statements and commitments have driven progress for racial justice causes, they capture attention and often praise. This carries nuanced implications. Are they trying to profit from good PR? Do they feel obligated to release statements? Are they trying to strike a balance in their messaging to appease audiences across the political spectrum? We collected and analyzed statements and commitments to learn what sport organizations say, commit, and do, and in comparing them, we noticed some key differences. We are not aware of any previous event that catalyzed such widespread, consistent, and politically-charged messaging across sport organizations, which is why we did this work. Read more below to see

The collegiate conferences we analyzed for statements and commitments are: Big 12, Big Ten, Pacific 12 (Pac 12), South Eastern Conference (SEC), Atlantic Coast Conference (ACC), and Big East. All of these conferences released official statements within two weeks of the killing of George Floyd, and none included the phrase “Black Lives Matter.” All but the SEC included “racism” or “racist” and “diversity,” perhaps reflecting the league’s reluctance to use such terms in a region with more conservative voting patterns than any other league we analyzed. The SEC region also, however, is home to some of the highest populations of Black Americans among the conferences we analyzed, so its statement seems to prioritize the predominant politics of the region rather than these racial minorities.

The Big East included more key terms than any other organization we analyzed, including racism, social justice, injustice, systemic racism, George Floyd, Ahmaud Arbery, Breonna Taylor, diversity, inclusion, and equality. This is not a measure of the statement’s effectiveness, but rather an indication that the conference did not shy away from including relevant and potentially controversial terms. The Big East also acknowledged its universities’ locations in large cities with high populations of people of color. In this way, it seems the Big East and SEC are on different ends of the spectrum. Both encompass regions with high populations of Black Americans, but the Big East, in a region with a more progressive political climate, embraced terms that might trigger conservative backlash, whereas the SEC avoided such terms.

Only the Big East made a commitment focused on the visibility of the cause during competition, in the form of Black Lives Matter patches on women’s and men’s basketball uniforms. Several conferences created coalitions of student-athletes and athletic administrators focused on racial justice issues, but the Big East stood apart by forming an external partnership with RISE (Ross Initiative in Sports for Equality) as part of its “BE the Change” advocacy program for racial justice issues.

A distinct internal commitment comes from an outlying and smaller conference that we did not include in the full analysis – the West Coast Conference (WCC). The WCC adopted a new hiring rule in August 2020 named the Bill Russell Rule after the conference’s legendary basketball player. The rule mirrors the NFL’s Rooney Rule in that one or more qualified minority job candidates must be interviewed for head coach, assistant coach, and upper-level administrative positions. This is the only commitment we found focused on diversity hiring in collegiate conferences.

During our meetings this week, the WCC Executive Council’s Student-Athlete Representatives (STARs) participated in important discussion on racial injustice in our society. On behalf of all WCC student-athletes, the STARs shared this statement to commit to bring meaningful change. pic.twitter.com/4K33fn8eI6

The Takeaway – For Now

Overall, among the six conferences we fully analyzed, the Big East seems to be best-positioned moving forward in its efforts for racial justice, and the WCC belongs in the same conversation. The Big East’s statement and actions were bolder than other conferences and seemed less concerned with dancing around political opinions that counter Black Lives Matter. Additionally, the Big East is building external partnerships, and the WCC is establishing new, league-wide hiring policies, both of which signal willingness to adopt needed changes, develop accountability structures, and inspire long-term impact. While some organizations skirted the issue with vague statements and one-time commitments that will likely lose meaning over time, these conferences stepped up by saying what they stand for, who they are now, who they want to become, and what they will do to get there.

What We Did And Why

Starting in July 2020, we compiled statements and commitments released by 23 sport-focused organizations, including six college sport conferences. The statements all came from the organizations’ official websites and/or social media channels. In addition to larger themes, we tracked specific terms that were and were not included in statements (e.g. “Black Lives Matter,” “racism,” “George Floyd”). The data itself is concrete, but our evaluations and judgment statements are based on our team’s impressions from taking in the entire data set. The criteria that guided our analysis emerged from the data over time and were not dictated by predetermined parameters. As such, we consider our analysis to be different than a traditional, peer-reviewed study, and we welcome differing interpretations of the data.

Overall, three general criteria emerged, all of which we found important in evaluating organizational statements and commitments: