Mankind has been sailing the Seven Seas for centuries.

The passage of time, population growth and settling of most of the Earth’s landmass are having a negative impact on the water that makes up a 70 percent of our planet’s surface.

While people can argue about climate change, the pollution levels in the oceans quietly increases. Quite simply, more people equals more trash, and that trash is finding its way into the oceans where it floats, is consumed by sea life and is slowly absorbed into the water.

The Great Pacific Garbage Patch — yes, it has an unofficial name — is a collection of plastic and floating trash. Winds and ocean currents have pushed the debris together and it covers more than 600,000 square miles — twice the size of Texas.

Last month, a 31-foot sperm whale washed ashore dead in Indonesia. Inside its stomach was more than 13 pounds of plastic — more than 1,000 pieces including cups, bags and two flip flops. It’s uncertain if ingesting so much plastic killed the whale, but local wildlife experts believe it played a role.

Recently the journal “Global Change Biology” published a report that examined more than 100 sea turtles of all seven species across the Atlantic, Pacific and Mediterranean. Every one had evidence of plastic in their digestive system.

According to the European Parliamentary Research Service, an estimated 4.8 million to 12.7 million tons of plastic enter the oceans each year. Into this gloomy seascape, sailing met science in a unique combination of a grueling sports competition and research gathering about microplastics in ocean water. 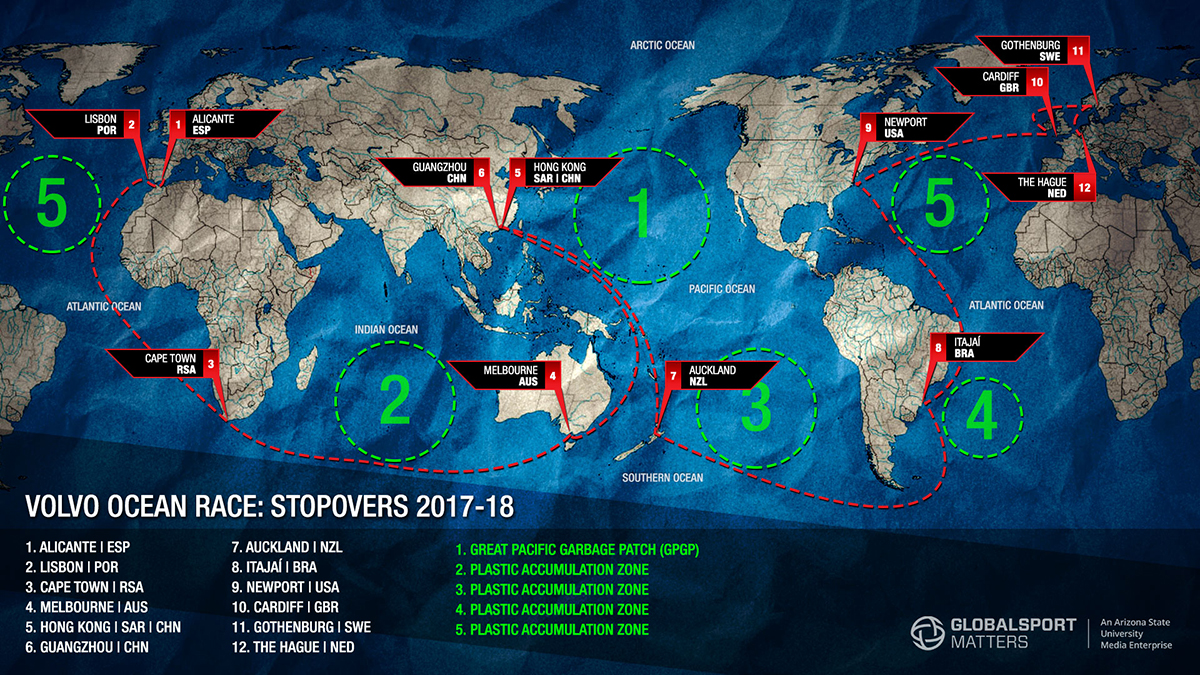 In 1973, the Whitbread Round The World Yacht Race was staged for the first time. The racing of identically rigged sailboats around the world, covering about 45,000 nautical miles, possessed more than a tinge of insanity. It is so grueling and time-consuming (about 250 days) that the competition is staged once every three years.

In 2001, the Swedish company Volvo took over as sponsor of the race. Over the years, the competition has changed from gentlemanly sailing of wooden luxury crafts to countries sponsoring carbon fiber craft with the idea that second place is for losers. In between each of the 11 stages — when the ships dock to repair and restock — thousands of fans gather, and corporations treat the visiting competitors similarly to how they treat American college football bowl game participants.

The 2018 Volvo Ocean Race finished in November. After 45,000 miles of sailing, the Dongfeng, backed by China, was the winning boat, coming from behind to win in the closest finish in race history. Two of the boats in this year’s competition — Turn the Tide on Plastic and AkzoNobel — did more than compete. Both boats were equipped with collection gear that provided valuable water samples for scientists to study.

“This is my sixth time around the world,” said Dee Caffari, skipper of Turn The Tide on Plastic, to Forbes. “The harsh reality for me is you’re seeing more rubbish. My crew doing this for the first time kept commenting on plastics. Bottles, balloons, bags, packaging. … The reality is it is getting worse. Micro plastics get eaten by animals; we’re eating the fish and it’s coming back into our food chain.”

Microplastics unavoidable even in the deep sea

There was not an epiphany or light-bulb moment that enabled the sails to meet the science.

“It was a confluence of a number of different things that came together and made it happen,” Robin Clegg, the information director of Volvo’s sustainability campaign, said in a telephone interview. “It's fair to say we probably underestimated the level of interest that there would be in the plastics issue. And it became a ground-breaking concept because it combined sailing and sports and science in a way that had never been done before. The idea of boats racing around the world while capturing scientific data seemed to capture a lot of attention.”

The idea was formalized about 18 months before the ships set sail. In May 2017, the concept took root about the same time as the formation of the Volvo Ocean Race Science Program.

One of the challenges was to find scientific equipment that wasn’t bulky or heavy because each ship is designed and outfitted the same way for a fair competition. Also, the race is so grueling for the crew, the process of information gathering had to be simple and efficient. The collection process generally took one crew member five to 10 minutes every two days.

The data collected provided some sobering conclusions. A total of 86 seawater samples were collected and of those 93 percent contained microplastic particles.

Microplastic concentrations tended to be higher where major ocean currents bring plastic from large inhabited areas. The highest levels were found in the South China Sea that feeds into the North Pacific Gyre and northwest of the Strait of Gibraltar, where the Mediterranean Sea and Atlantic Ocean meet. However, even at Point Nemo, the oceanic point farthest from land — a point closer to the International Space Station than to humans on earth —  contained between nine and 26 particles of microplastic per cubic meter.

In addition to the research information about microplastics, the boats also collected oceanographic data about temperature, dissolved CO2, salinity and algae content. That info helps scientists gauge the levels of ocean health.

At the 11 ports of call where the ships refitted and prepared for the next leg, the Volvo Race emphasized the scientific mission and the crisis of plastics in the ocean. While on shore leave, crews participated in beach cleaning. Also, the recycling of water bottles plus initiatives to develop clean water production were emphasized.

The Volvo Ocean Race Science Program was honored at the international Beyond Sport Awards, receiving the award for “The Best Corporate Campaign or Initiative in Sport for Good” category. The New England Office of the U.S. Environmental Protection Agency presented the Volvo program with the Environmental Merit Award.

“The objective of the science element of the sustainability program was to further our understanding of the extent to which microplastic pollution has now touched our remotest oceans; places that were previously considered to be pristine natural environments,” said Anne-Cecile Turner, the sustainability program leader. "Our aim is that this research will then contribute to the international standardization of ocean microplastic research."