Latina girls lag behind their peers in sports participation, and part of the reason is the messages they’re receiving. The girls who don’t get the chance to play sports are missing out on all the physical and mental benefits they provide.

Girls play sports less than boys overall, and Latina girls get in the game less than other girls. According to 2019 data from the U.S. Centers for Disease Control and Prevention (CDC), 54.6% of high school girls played on at least one sports team, and only 48.4% of Hispanic/Latina girls did.

Many kids’ physical activity consists mainly of sports. For children between the ages of 6 and 17, the CDC recommends at least 60 minutes of daily physical activity. The CDC surveyed high schoolers and found that 23.2% of them met these recommendations, but only 20.9% Hispanic/Latino students did, and only 15.4% girls did. Physical activity helps reduce the risk of several health problems, and Hispanic adults have high rates of diabetes and obesity.

But the benefits of sports go well beyond the physical—and well beyond the playing field. They include improved academic achievement and self-esteem, as well as a sense of belonging. “If we don’t provide girls of color with equal opportunities to play sports and also promote their sense of belonging, then they don’t have those same opportunities,” said Vera Lopez, professor of justice and social inquiry in the School of Social Transformation at Arizona State University.

Why do Latina girls lag behind their peers in sports participation, and what can be done to close the gap? Lopez’s research aims to answer these questions. She has conducted focus groups with Latina girls and interviewed coaches to better understand the barriers these girls face, as well as what encourages them.

Lopez’s current research, supported by a seed grant from the Global Sport Institute at Arizona State University, focuses on othering—how Latina girls are made to feel like they don’t belong in school-based sports. They receive messages from schools, coaches, or peers “that they don’t belong, that they are somehow different, or that they have to be accommodated,” Lopez said.

Lopez conducted focus groups with 78 Latina girls between the ages of 12 and 15, in seventh through ninth grade, and interviewed 15 coaches about the messages that Latina girls receive about school sports. These messages fall into four main categories:

Here are some of the messages the girls received that may have discouraged them from playing sports:

Girls are physically different.
Most of the girls and coaches said they believed boys are bigger and better able to play sports like football.

Girls are more emotional.
Nine of the 15 coaches believed girls are intrinsically more emotional. Some of the older male coaches, in particular, believed that girls are sensitive, Lopez said. “They’d say you have to use kid gloves, and you don’t want to hurt their feelings. They were uncomfortable with seeing girls cry,” she said.

Latina girls and families don’t see the value of sports.
Ten of the 15 coaches agreed, voicing beliefs that in Latino families, family always comes first, so girls have to help with household obligations and miss out on sports, Lopez said. But that cultural explanation doesn’t fit all Latinas, and the coaches “did not critically look at the intersections of class and race and gender” that might contribute to that belief, she said. The girls themselves said they believed that their parents would let them play sports if they wanted to.

Coaches treat girls differently.
“Eight of the coaches said they had to be a little bit more careful with girls because girls are more fragile, and they didn’t want to hurt their feelings,” Lopez said. She added that the coaches support these athletes in several ways and are committed to supporting them, but because this phase of her research focuses on othering, this is one of the messages that emerged.

Boys get more funding, more recognition, and more fans.
One of the girls said that “boys’ teams, even when they’re not good, get better uniforms.” Most of the schools involved were low-income Title 1 schools, and the coaches often said that all sports needed more funding, but that certain sports, such as football, received more funding than the others. When looking at attendance for girls’ sporting events, 53 of the girls and all of the coaches said that more people attend boys’ events, even when girls and boys are playing the same sport. All of the girls and 14 of the coaches said boys get more recognition, in the form of announcements and acknowledgment of their achievements, for example.

Lopez published a study in 2018 on how gender-based teasing served as a barrier to Latina girls’ participation in sports. It looked at interpersonal relationships and found that the girls often felt self-conscious and insecure about participating in school-based sports and physical activity. They did not like being the center of attention, were self-conscious about their appearance, and were afraid to make mistakes.

A paper on Lopez’s current research is under review. She aims to help develop more inclusive school-based practices and policies that can boost Latina girls’ participation. “We know that girls who are involved in sports experience increases in self-esteem and decreases in depression,” she said. And the Latina athletes she has interviewed have often said that their sports make them feel connected, “like they are part of the team, and part of a family in the school setting.”

The participation gap is wide: Girls play sports less than boys at all age levels. For kids between the ages of 6 and 12, the Aspen Institute’s State of Play report found 39.1% of boys played a sport on a regular basis in 2019, while 32.7% of girls did. At the college level, in 2019, 44% of NCAA student-athletes were women. Only 6% of the student-athletes—including both men and women—were Hispanic/Latino.

“Coaches play a powerful role, and they are highly engaged and highly motivated,” Lopez said. Many of them go above and beyond—helping their athletes with homework, for example—and see the girls’ sport experience as an important part of their youth development, rather than just an extracurricular activity.

In efforts to make sports more inclusive to Latina girls, training for coaches on “sex-based ideology, gender, and ethnic stereotypes, and how that can influence coaching pedagogy” might help, Lopez said, “so that coaches learn to be reflective about some of the ideas and stereotypes that we’ve all grown up with.”

Lopez is also working with two other Arizona State University professors to create a coaching course for undergrads interested in becoming role models and coaches in girls’ sports. The course will develop well-trained, empowered coach role models and will uncover strength, support, and recognition in young female athletes.

Lopez has seen how girls benefit from sports in her previous role as a member of the Girls on the Run of Maricopa and Pinal Counties Board of Directors and as a member of Girls on the Run’s national IDEA (Inclusion, Diversity, Equity, and Access) Commission, which started its work last month. “We’re looking at how we can make Girls on the Run, as a nonprofit organization that operates a school-based sports program, more inclusive, more representative, and more welcoming for girls from different backgrounds,” Lopez said.

The Women’s Sports Foundation (WSF) has been working to increase participation and retention of African American and Hispanic girls in sports, especially in under-resourced communities, through its Sports 4 Life program, which it and espnW cofounded in 2014. These girls are disproportionately excluded from sports, and they are more likely to start playing sports later and drop out earlier than their peers, according to WSF.

Sports 4 Life provides grants to small and mid-size organizations to create or expand programs for girls in middle and high school. Over its first seven years, the program has seen how Hispanic girls have benefited. In particular, 84% of Hispanic girls reported getting better grades in school, said Karen Issokson-Silver, WSF’s vice president of research and education. “The girls are connecting the dots between their sport experience and their school performance, and that’s really exciting,” she said.

When the girls first sign up for these community programs, some “may not be feeling very confident, they may be struggling in school or experiencing hardships at home, and may not feel like they are going to succeed in life,” said Elizabeth Flores-Amaya, WSF’s director of community impact. But after the programs worked with them and offered opportunities for them to be successful, that changed, she said.

“We see them graduate from high school and college, and many come back and coach,” Flores-Amaya said. “They know firsthand the positive impact the program has had on them and want to continue to be involved and give back to their community. And that is very meaningful because then, these girls can identify with them and say, ‘If she can do it, I can do it, too.’”

Hispanic girls often face various barriers, including gender norms, socioeconomic factors that make participating in sports more difficult, and factors such as language barriers, Issokson-Silver said. “It’s really the intersection of those things that can have a particularly encouraging or discouraging impact on girls’ participation.” Considering all these factors, she said, “you can start to see the picture of how challenging it can be for a Hispanic girl to see herself as an athlete and be motivated to participate.”

Flores-Amaya has also seen some of these barriers in a different context—in her role as a Girls on the Run coach. “In the community that I serve, there was a communication barrier, where many of the parents don’t understand English, so we had to translate the materials. They also wanted to see a coach that looked like the girls or that spoke their language,” she said. “Making sure parents are comfortable with the program is so important because then they are able to better support their children and their participation.”

Many of the Sports 4 Life organizations “remove all of those barriers that these girls have. So they’ll provide transportation, the apparel, the equipment—if there’s a fee that they have to pay, they remove that barrier so there isn’t anything that will prevent them from playing,” Flores-Amaya said.

Both Lopez’s research and the Sports 4 Life program point to some ways that these barriers might be eliminated and that schools, coaches, and others might better encourage Latina girls to play sports.

“The cultural and environmental messages that they’re getting can certainly get in the way—that can sometimes be a deterrent. But we see, over and over again, Hispanic girls are pushing through all of those norms and boundaries that others might set for them,” Issokson-Silver said. “We see all of the ways in which Hispanic girls have successfully been engaged in sports and thrived in sports.”

Allison Torres Burtka is a freelance writer and editor in metro Detroit. You can read more of her work here. 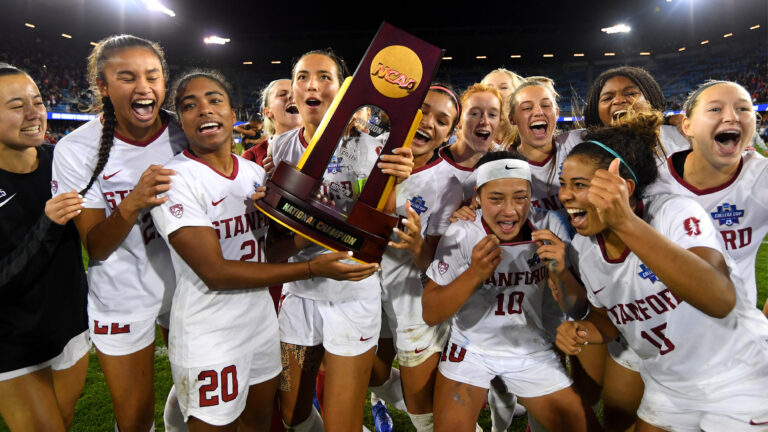 The NCAA Gave The World A Beautiful Game. Can It Remain Its Star Player For Long?