Women have always been at the forefront of athlete activism, and today's generation is championing a wide variety of causes while also using social change as a platform through which to increase the popularity of their leagues as well as craft a better future in women's sports.

Activism by women athletes around the globe dominates sport headlines. From women’s professional surfers advocating for equal prize money to track runner Allyson Felix battling for maternity protections from Nike, and from Australian Football League women’s players fighting for living wages and professional standards to American soccer players illuminating rampant sexual abuse and harassment by coaches and silence by league officials, activism by and for women athletes is familiar.

Even when careers, medals, and participation are at risk – like when Olympian Raven Saunders raised her arms above her head in the shape of an “X” on the Olympic track and field podium in Tokyo to represent the “intersection of where all people who are oppressed meet” – athletes leverage their platform to highlight social issues such as racial, gender, and homophobic discrimination. The implications of women athletes’ activism are multifaceted.

Not only can women athletes’ activism today continue the fight against the systemic inequities these athletes face, but also it has also shown potential to provide business value to the teams and leagues in which these women exist.

Why Sport Activism By and For Women?

Given their existence in a space historically built for and by men, women athletes maintaining a presence in sport is inherently a direct challenge to sexism. U.S. women’s national soccer team captain Megan Rapinoe once said that as a marginalized community, women athletes feel their visibility in sport is a “walking protest.” When explaining a pattern of activism in the Women’s National Basketball Association, especially pertaining to Black Lives Matter protests, union president and former MVP Nneka Ogwumike regarded women basketball players’ inherent transgression of White, masculine, heterosexual supremacy as a pre-cursor for activism:

In a sport structure with low numbers of women in leadership positions, women athletes do not have same-gender representation at decision-making levels. As a result, women athletes often are their own best advocates because male-dominated sport leadership may ignore or disregard inequities and injustices. Take, for example, an independent report on player abuse within the National Women’s Soccer League, which highlighted how instead of prioritizing athlete health and safety, a predominantly male leadership base in the league protected male coaches who committed acts of sexual abuse and harassment. The report and subsequent changes only came after players spoke up through traditional and social media to put pressure on the league.

Women athletes’ activism is found not just in elite or professional sport but also among grassroots and amateur levels. It’s also not unique to the U.S. In Spring 2022 in Scotland, women’s amateur soccer teams at Clyde F.C. and Raith Rovers F.C. protested their male team affiliates’ signing of David Goodwillie, a convicted rapist, by boycotting, severing contracts, and enacting social media campaigns to showcase their anger at club administrations’ failure to support women victims. As a result of the women’s activism, Clyde and Raith Rovers were the subjects of public outcry, sponsors pulled their support from the teams, and club administrators eventually decided to terminate Goodwillie’s contract.

When operating in a system centered on reinforcing male power, women athletes have again and again decided to take matters into their own hands to demand better working conditions for themselves. Beyond their personal sporting experiences, though, women athletes also advocate against the broader social injustices that marginalize not just their own community but also other groups who do not have a visible platform to demand change.

Activism by women athletes is not a recent phenomenon. It’s actually ingrained in women’s sport history. Not willing to accept marginal positions, women athletes have been forced to self-advocate in male-dominated sport spaces that refuse to listen to women’s voices and instead perceive women’s inclusion as a threat to the status quo.

However, despite women’s activism, male athletes like Muhammad Ali, Colin Kaepernick, Tommie Smith, and John Carlos often come to mind first in discussions of athlete activists. Feminist scholars across sport disciplines have recently argued how the centering of male athlete activism renders women athletes’ activism invisible, particularly for Black women, whose voices of resistance are often further erased or silenced. In particular, queer athletes and athletes of color who experience intersecting and overlapping identities have historically been the most outspoken athlete activists. Amira Rose Davis highlights how Black women athletes have been at the forefront of athlete activism since at least the mid-20th century, including American track and field gold medalists like Wilma Rudolph, who participated in sit-ins to protest a racially segregated restaurant in Tennessee in 1963, and Wyomia Tyus, who wore dark shorts instead of the assigned white shorts as a way to highlight racial segregation in the Jim Crow South.

Departing from historical patterns where women athletes were penalized for activism, activism by women athletes today is often rewarded. Tennis legend Billie Jean King was outed by the media in the 1980s and subsequently lost sponsorships and endorsements. Currently, some publicly queer athletes, notably athletes (who are White) like Sue Bird and Megan Rapinoe, garner lucrative sponsorships and enhanced reputations. Shifting cultural values accepting diversity and inclusion mean that brands are seeking to capitalize on openly queer athletes’ authenticity rather than view their identities and activism as risk factors potentially deterring consumers.

In our current socio-cultural environment, activism by women athletes is a valuable triple threat for the sport industry, with potential to benefit individual women athletes, brands and sponsors, and sport properties. A report published earlier this year by a multidisciplinary group of gender and sport scholars, DisruptHERS: Driving a New Model for Women’s Sport, identified athlete activism and social justice as a way “to create and show the value of women’s sport that circumvent(s) traditional metrics and the status quo.”

Women’s sport struggles for media visibility and sponsorship in a traditional sport market shaped by masculine values that inherently privilege men. Not only do men dominate the media spheres that cover (or more accurately, do not cover) women’s sport, but sport itself is often used as a mechanism for reinforcing patriarchal social structures, making women and non-White competitors the “other.” Sociologist Rachel Allison argued organizational necessity for business success may conflict with some women’s sport managers’ perceived ideal that the purpose of sport is solely female empowerment.

Activism by women athletes lays bare the flaw in the ideal by calling out the need for systems change and a new vision. A new vision illuminates women athletes’ potential in sport business. In the DisruptHERs Report, athlete activism is viewed as a lucrative opportunity for sport properties and external sponsors. Activism by women athletes is profitable because it appeals to an increasingly diverse and younger fan base, aligning with shifting cultural values and promoting activism-based sponsorship activation inspiring brand loyalty.

While research on women’s sport fans is growing, recent studies illustrate how fans of women’s sport are attracted to inclusivity and visible commitment to topics of gender and social justice found in women’s sports. Allison and colleague Stacey Pope discovered at the 2019 FIFA Women’s World Cup how spectators appreciated women’s sports’ inclusion of groups typically excluded in masculine sport structures – like women, queer communities, and families. Additionally, women’s sport fans conceptualized themselves and purchasing decisions as changemakers, something also found in research by the Sport Innovation Lab. A legacy of women athlete activism led to fan loyalty through personal connections and a shared “sense of collective struggle against the restrictions of sexism, both in sport and in society that they had personally faced,” according to the report by Allison and Pope.

Gen Z is poised to influence the sport market with growing consumer power. Defined by diversity and high levels of education, Gen Z embraces inclusivity; repudiates racism, sexism, and homophobia; and is loyal to brands that align with their values. Furthermore, as the DisruptHERs Report explained, within digital spaces, “[women] athletes have gained agency to build their own viable brands, establishing themselves as marketable influencers capable of aligning with powerful brands to drive social change and increase fan engagement.” Women’s sport teams, by building inclusive cultures, a social justice focus, and accessibility via social media, have cultivated a near-perfect storm that is well-positioned to attract, and ideally retain, Gen Z fans.

Based on the data, women athletes’ activism can be leveraged as a business strength. However, capitalizing on athlete activism is not the complete answer for promoting equity in women’s sport. For example, the necessity of women’s sport activism should be questioned. Why must women athletes continue to shoulder the burden of being athletes and activists? Is the expectation that all women athletes act as activists? Will there ever be a time when women athletes don’t need to self-advocate in order to dismantle pervasive sexism, racism, and homophobia in sport? It is too early to draw any conclusions. A lot of game remains!

Despite the positive conclusions about the value of activism by women athletes, the potential dangers of the commercialization of activism are real. Some critics argue corporate sponsorship of social justice is merely symbolic and does not create systemic change against injustice. Furthermore, feminist scholar Catherine Rottenberg discussed how a recent emergence of “neoliberal feminism” employs feminist language to boost capitalist structures that re-create racist, sexist, and classist systems rather than promote equity. To reimagine the new vision of women’s sport business, these concerns must be considered to cultivate much-needed systemic and institutional change.

The Personal Is Political

Once thought of as taboo, political movements are a reality in contemporary sport culture. Compared to a historical legacy of women athletes who over decades have demanded change and faced many forms of backlash, discrimination, and harrassment, women athletes today are rewarded as respected leaders for social justice. The future of women’s sport, in part, embraces activism as a business strength that is central to attracting fans, promoting loyalty, and garnering sponsorships. Activism by women athletes, like the Olympic display of social justice by Raven Saunders or the pregame call on sport organizations to protect players from sexual harassment by USWNT and England National Soccer teams, is here to stay. Those who fail to recognize the power of activism will lose out on opportunities that can boost profitability of the women’s sport industry while also cultivating systemic change that can help create more inclusive, safe, and empowering environments for all communities in sport and beyond.

First, activism by women athletes has the potential to shape the future of the business of women’s sport. Women’s sport, compared to men’s, has historically marginalized spaces that suffer from limited sponsorship, broadcasting, and marketing for a multitude of reasons related to sexism, gender bias, male power, and men’s control of sport. Activism of women athletes may be a defining differentiator that can help lift and leverage digital spaces, appeal to an increasingly social-justice focused Generation Z market, and attract activism-based brand sponsorships. Ultimately, sport activism by women athletes can disrupt historical patterns of marginalization and illustrate an important shift where social justice is embraced and promoted to the benefit of making sport more empowering, equitable, accessible, and safer for all participants.

Across the world, athletes continue to use the fame and audience afforded to them to fight for social and political change. Today's athlete activists embrace the legacy of their forebears while also reimagining how and what they fight for.

Following a global pandemic and racial unrest in recent years, athletes have an opportunity now to set the course for a new era beyond the game. 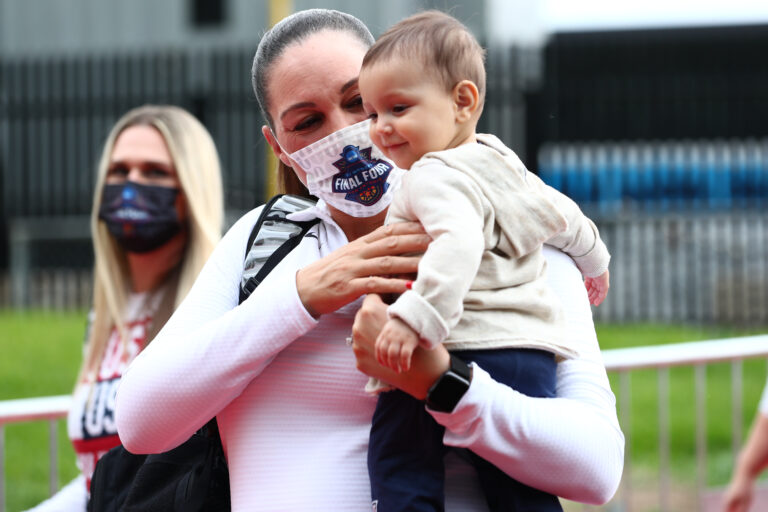