While many cried "sportswashing" as Russia hosted the Olympics and World Cup last decade, the sports world did not collectively respond to the country's various evils until this week, when Russia's invasion of Ukraine presented a tipping point that undid years of efforts to "sportswash" its image.

Two weeks ago, Vladimir Putin’s Russia was an indisputable sports superpower. The country had hosted the most recent FIFA Men’s World Cup, and St. Petersburg’s Gazprom Arena was scheduled to host what would likely be the planet’s most-watched football game of the year, the UEFA Champions League Final.

Gazprom, the Russian energy behemoth, was European football’s biggest sponsor, its corporate logo emblazoned not only all over broadcasts of the Champions League, but also on the jerseys of Germany’s FC Schalke 04 club. In London – or “Londongrad,” as it is often described when discussing the level of Russian oligarch investment in the city – the Premier League’s Chelsea FC, owned by Russian tycoon Roman Abramovich, was the world’s defending club champion and boasted a worldwide following. Up in Manchester, Aeroflot was one of Manchester United FC’s lead sponsors, and viewers tuning in to matches at their Old Trafford stadium from around the world in recent months would have seen the digital billboards ringing the pitch proclaiming that the Russian airline would reconnect the world as it emerged from the coronavirus pandemic.

And that’s not all. Russia had also become a proud Formula 1 venue, with the Russian Grand Prix held in the Black Sea resort of Sochi, home of the 2014 Winter Olympics. And for that same highbrow sports-watching demographic, the country has been a seemingly inexhaustible factory of tennis talent, producing top players such as current world No. 1 Daniil Medvedev.

For Putin, sport has always provided powerful symbolism. Drive and excellence, either at the national or individual level, are held up as an antidote to the perceived decadence and flabbiness of the Soviet Union’s post-Cold War collapse. Sport equals vigor, and counters the idea that Russia has an aging, unhealthy society. Hence the pervasive imagery of sporting Putin, the energetic leader racking up goals against hockey stars, horseback riding without a shirt, penning books about judo, swimming in icy waters, fly fishing, and allegedly dating former Olympians.

For Russia as a whole, the Sochi Games served as a source of national validation. Putin reportedly spent tens of billions to host the event, and his regime’s manic need to prove to the Russian people that it had Made Russia Great Again could best be seen by the extent of its cheating through elaborate, state-sponsored doping. The toothless punishments for those schemes – allowing Russian athletes to compete at the Tokyo and Beijing Games, but under the flag of the “Russian Olympic Committee” – did little to dampen domestic enthusiasm for the country’s athletes. And it likely strengthened Putin’s sense that he could cross any number of international lines with impunity, given the fecklessness of his opposition. After all, Russia’s rise as a global sport power has been accompanied by acts of aggression against neighboring countries and domestic opponents without significant pushback.

But not anymore. In the wake of Russia’s invasion of Ukraine, the country has been thoroughly ostracized from global sport. All those years and all those billions of investment and effort to acquire goodwill, amass soft power, and rebrand Putin and his regime – all of it is gone, wiped out with breathtaking and unexpected swiftness, within ten days. The world’s sporting organizations have airbrushed Russia out of the picture, the way Stalin and his minions once airbrushed out Trotsky.

The International Olympic Committee (IOC) and FIFA – two organizations with long histories of working with morally dubious governments and world leaders – have proclaimed Russia beyond the pale. The Russian men’s national team can no longer seek qualification for this year’s World Cup. The Champions League Final has been moved to Paris; the lucrative Gazprom sponsorship of the European federation has been canceled; Spartak Moscow has been booted from the Europa League. In Manchester, you won’t see any more Aeroflot ads – or, for that matter, any more Aeroflot jets, as the airline’s only remaining “foreign” destination is Minsk – while Chelsea, incredibly, is on the selling block as Russian ownership is no longer politically tenable.

No more Russian Grand Prix in Sochi. Russia can’t even compete in the Eurovision Song Contest. Putin was personally stripped of his honorary presidency of the International Judo Federation, which also pulled a big competition from Kazan, Russia, that had been scheduled for May.

Bookended by an Olympics in Beijing and a World Cup in Qatar, 2022 was always going to be an intriguing test for just how far the geopolitical appropriation of sport by deep-pocketed interests with dubious agendas could go before sparking a backlash from a global fan base that is arguably more socially conscious than ever before. But who knew it would be a Russian invasion of a neighboring country that would break the dam?

And that break is significant. To be sure, the impact of Russia’s reprehensible invasion on the world of sport is a decidedly secondary concern when compared to the horrific suffering of the Ukrainian people, as well the broader threat that the war poses to European peace and security. But there is nothing secondary about the power of sports to influence Russia’s perception of its status in the world.

Some of the financial sanctions imposed by the West will hurt ordinary Russians in more tangible ways, but none will be more symbolically potent than sport’s red card – a clear signal that Russia is now a pariah state, undeserving of play with the rest of the world. Regimes like Putin’s buy their way into hosting, winning, and governing global sport to project power, prove their vitality, and amass influence and prestige. Rejection by the likes of FIFA and the IOC, organizations with more members than the United Nations, will sting badly.

In another self-inflicted wound for Putin, the United States will now have a stronger hand in the ongoing geopolitical contest to control the fate of the one form of shared public culture and live media that most passionately connects the largest number of people around the world: sport. Recent years have seen the rise of two competing visions of global sport governance: the “sportswashing” practiced by some Persian Gulf states and regimes like Putin’s and Xi Jinping’s, and the commercially-driven expansion of private American sporting interests.

In 2015, when the U.S. Justice Department indicted many of FIFA’s leaders on various corruption charges, Putin cried foul, incensed that Americans were sticking their noses in something that previously had been none of their business. He accused the Obama administration of wanting to strike back at FIFA for having awarded the 2018 and 2022 World Cups to Russia and Qatar, respectively, over the competing bids of England and the U.S. Probably because he doesn’t appreciate the concept of independent prosecutors upholding the law wherever that may take them, Putin was overstating the U.S. government’s intentionality in the case. But he wasn’t wrong that America is more plugged into the world’s game than ever before.

Related: 2022 World Cup in Qatar Will Arrive With New Level of Athlete Activism

The English Premier League, the most globalized of all sporting domestic leagues, is the frontline in the showdown between these two competing visions. Many of the bigger clubs in England are now owned by American billionaires who see in European soccer a way to take their sports franchise-operating know-how overseas – Liverpool shares an owner with the Boston Red Sox, Arsenal with the Los Angeles Rams, Manchester United with the Tampa Bay Buccaneers, and so on. They compete in the same league with teams owned by Abramovich and Gulf State players whose motivations for being in the game, and the corresponding resources they bring to the table, are far different.

The Premier League is wildly popular in Russia. Last weekend, Russian fans would have tuned in to watch all teams “standing together” with Ukraine, every captain’s armband a Ukrainian flag. But going forward, Russian fans will no longer be able to catch any of the action, as the league suspended its licensing agreement with its Russian broadcaster. Meanwhile, several of Chelsea’s potential buyers are American sports interests; if the club ends up in U.S. hands, it will be another blow to Putin – the loss of the crown jewel in Russia’s sportswashing strategy.

The larger conflict between competing visions of sport is far from over. There have been other heartening signs of resistance to the notion that our games ultimately belong to the highest bidder, no matter what, most notably the Women’s Tennis Association principled stance against China in the Peng Shuai case late last year. Nevertheless, the IOC, FIFA, and plenty of other federations that have abandoned Putin in the face of universal outrage will continue to engage with – and profit from – plenty of unsavory and deep-pocketed partners. For now, Russia is no longer one of them. That’s a seismic change, and one that hopefully will help show the Russian people that their emperor has no clothes. 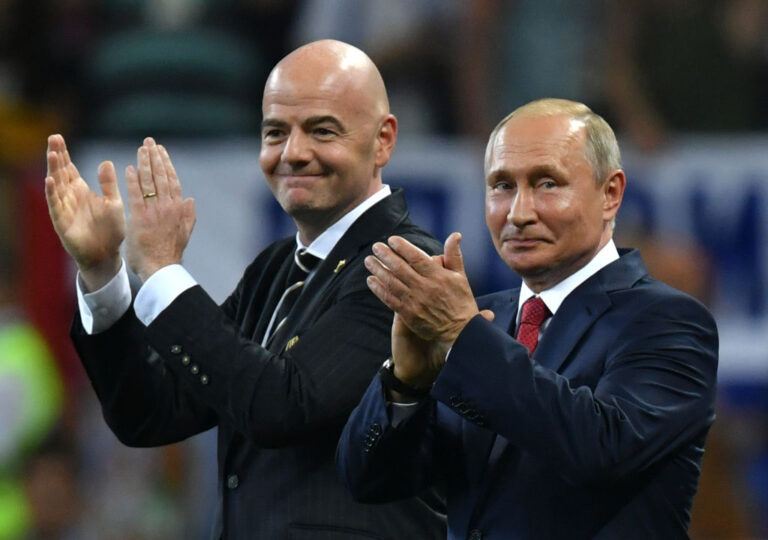 By Excising Russia, FIFA Did the Right Thing – But Not For the Right Reasons