In the transcendent baseball season of 1947, highlighted by Jackie Robinson becoming the first African-American to play in the major leagues, the first Little League Baseball World Series was played in Williamsport, Pa.

Ten years after Robinson’s historic breakthrough, the Industrial Little League of Monterrey, Nuevo Leon, Mexico, became the first team from outside of the United States or Canada to participate in and win the Little League Baseball World Series.

Upon their return to Mexico in 1957, Macias and his teammates were awarded high school and college scholarships by the mayor of Monterrey. Macias attended high school but did not go to college, opting instead to sign with the expansion Los Angeles Angels in 1962. He spent parts of two seasons with the team’s Single A minor-league affiliates in San Jose, California, and San Luis Potosi, Mexico.

Although Macias never reached the major leagues, he did play in the Mexican professional leagues until 1974. His success in the Little League series was a harbinger of things to come.

While the Monterrey Little League team was winning back-to-back championships in 1957 and 1958, Mexican and Latin American players were beginning to impact major league rosters.

In 1958, 5.9% of major league players hailed from Latin American countries, a number that has increased steadily to nearly 30% in 2019.

The eight-team International bracket now comprises half of the 16 teams in the LLBWS tournament. The other half is the U.S. bracket of eight teams, which ensures a U.S. squad faces an international team for the championship. The top two international teams and the top two American squads will face each other in national and international final games on August 24 with the winners playing in a one-game LLBWS championship the following day.

Infielder Hector Torres and outfielder Carlos Treviño Castro, known as Bobby Treviño, were on the Monterrey championship team in 1958, and both reached the major leagues. Torres spent parts of nine seasons with five big league clubs while Castro made it for a brief cup of coffee with the Angels in 1968. His younger brother Alex Treviño was a catcher for six teams in 13 major league seasons. 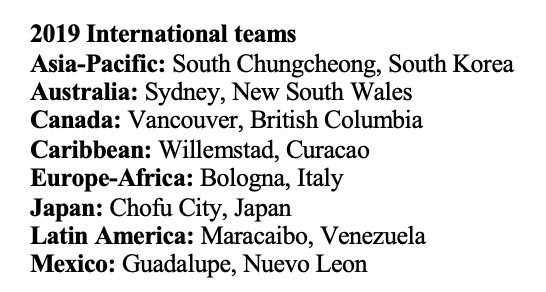 Ten Latin American players from Mexico, Venezuela, Panama and Curaçao have played in the Little League Baseball World Series and reached the major leagues, including current Minnesota Twins infielder Jonathan Schoop and Oakland A’s infielder Jurickson Profar who were teammates on the Pabao Little League Willemstad, Curaçao, 2004 LLBWS championship team. Profar’s younger brother Juremi played for Curaçao in the 2007 and 2008 LLBWS and is currently playing at the Class AAA minor-league level for the Texas Rangers. A third brother, Judrick Profar, is playing for Curaçao in this year’s series.

The small island nation with a population of 160,000 has emerged as a youth baseball powerhouse and pipeline to the major leagues. Curaçao has qualified for the International bracket of the LLBWS in 12 of the past 19 years, including this year. Curaçao’s 2004 championship squad remains the only team from the Caribbean Region to capture a LLBWS championship, even though the region includes the traditional baseball hotbeds of the Dominican Republic and Puerto Rico.

Since that 2004 championship, in addition to Schoop and Profar, eight other players from Curaçao have reached the major leagues, including Los Angeles Dodgers relief ace Kenley Jansen and Los Angeles Angels shortstop Andrelton Simmons.

Other Latin American Little League Baseball World Series participants to reach the major leagues include 14-year veteran pitcher Wilson Alvarez, who played for Maracaibo, Venezuela, in 1982, and current Oakland A’s relief pitcher Yusmeiro Petit, who was a member of the Venezuela’s first LLWS champion team in 1994. Petit was a member of the 2014 World Series champion San Francisco Giants, making him the only player to play for both Little League and Major League Baseball World Series winners.

With a history of participation in the Little League Baseball World Series dating to the 1960s, Venezuela captured a second LLBWS championship in 2000 and emerged from the Latin American regional pool this year, qualifying for the International bracket for the sixth time in the last 13 years.

Nearly 600 Venezuelans have played in the major leagues since Washington Senators pitcher Alex Carrasquel made his debut in 1939. With approximately 100 currently active players, Venezuela has provided the second-most foreign-born major leaguers, behind the Dominican Republic.

Baseball has been the most popular sport in Japan for almost as long as it has been regarded as the national pastime in the United States. The inclusion of Japanese teams in the newly created Pacific Region, which also included Hawaii, in 1961 brought a heightened level of competition to the LLBWS and altered the balance of power.

West Tokyo became the first Japanese team to win the LLBWS in 1967, sparking a period of dominance in which teams from the Far East Region won 20 of the next 24 LLWS from 1967-1991.

Teams representing Taiwan (Chinese Taipei) won 10 of 13 LLBWS from 1969-1981 and five of six championships from 1986-1991. Taiwan’s 17 Little League championships are the most by any country, excluding the combined total of teams from the United States.

Outfielder Chin-Feng Chen, a member of the 1990 Tainan, Taiwan, championship team became the first Taiwanese major-leaguer when he made his debut with the Los Angeles Dodgers in 2002.

The International bracket continues to be an indicator of things to come.