First, NIL upended U.S. college sports. Now, it's expanding through high schools across the country and heightening the stakes of big-time prep basketball -- a sport already known in large part for highlights and hoopla -- for young athletes.

While new name, image, and likeness (NIL) rights have turned American college sports upside down, high schools have been slower to adapt. But they are catching up quickly: In just one year, the number of states allowing high schoolers to sign NIL deals while competing in interscholastic athletics has increased from six to 25 (plus Washington, D.C.).

Among prep schools and traditional high schools, basketball has always been a highly marketable sport, particularly for star players. Phenoms such as LeBron James and Zion Williamson have passed through the American Athletic Union or “AAU” circuit (club or travel teams made up of grade and high school age youth who compete against each other nationally) and become celebrities, putting on shows in small towns and dingy gyms as they are showcased in what’s also called grassroots basketball.

Recently, the exploding popularity of social media, especially among young people who tend to be cultural tastemakers, has made NIL and high school basketball a natural fit. To date, the impact of NIL has been gradual and selective, but it has brought swift changes to players, coaches, parents, and administrators – with more to come.

Despite the new state laws and growing familiarity with NIL, very few high school basketball players are signing lucrative NIL deals. The best opportunities have mostly been reserved for the upper crust of the sport, in terms of both talent and social media popularity.

“Being truthful, I think the [NIL] impact has been on the highly ranked and highly touted kids,” said Patrick Massaroni, head coach at Archbishop Stepinac High School in White Plains, New York, a nationally ranked basketball program. “In the high school game, if you’re highly ranked, so you’re pretty good at basketball, if you have a social media following and presence and you’re well known, NIL is impacting those kids, whether male or female.”

LeBron James’ two sons, Bronny and Bryce, recently signed with Klutch Sports Group – which also represents LeBron and is run by his long-time friend, Rich Paul – for the purpose of securing NIL deals prior to potential professional basketball careers. Bronny James is a top-40 player in the 2023 class, according to 247sports.com and Bryce is highly rated in the class of 2025. Perhaps more importantly, the sons have a combined 8.1 million followers on Instagram, and their father is a global icon. Bronny recently signed an NIL deal with Beats By Dre.

Joe Mantegna has been head coach at Blair Academy in New Jersey since 1999, and he also coached the 2022 USA Nike Hoop Summit Team, for which he oversaw 12 of the top high school basketball players in the class of 2022. He observed players receiving NIL offers practically before his eyes.

Related: How College Athletes Can Make NIL Deals That Set Them Up Now and In the Future

NIL critics and others have expressed concern that NIL deals could become a detriment to team cultures in every sport. That concern is perhaps even greater in basketball, which features relatively small rosters. Montegna, however, did not observe any issues while coaching the best high school seniors in the country.

“They were workers. They were coachable. They were high-character dudes. They had a growth mindset. They didn’t think they were ‘there’ yet. I was really uplifted by that experience,” Montegna said.

Massaroni, whose Stepinac team has one or two players with NIL deals, said he has yet to receive any complaints from his players about NIL possibilities. Stepinac has an independent NIL consultant available for players who have questions about potential opportunities – “to take the coaches out of it,” Massaroni said.

As Massaroni stated and according to Terrance “Munch” Williams, executive director of the PSA Cardinals in New York City, an AAU club that counts pros like Mo Bamba and Cole Anthony among its alumni, substantial NIL opportunities have gone primarily to the best players in their respective classes to this point. The majority of high school players do not get these opportunities, and even most of the top 100 players in any given class aren’t likely to receive anything more than free apparel for a social media post.

“I think the guys or the women who are at the upper echelon of the high school game, whether that be the top 20 or 25 guys, they’re going to get the deals that could generate [money],” Williams said “And I think it’s the second level of guys that are kind of getting these one-off deals that are more like, ‘You post these things, and you get a T-shirt.’”

Permitting basketball players of any age to profit from their talents is a positive development for the people that matter the most in this discussion: the players. There is no reason to treat youth basketball players differently than young musicians, actors, or social influencers. However, there are potential pitfalls that come with the deserved gains. NIL may create more pressure, peer or otherwise, for teenagers to seek superficial validation.

“Basketball is a team sport, and I think NIL is kind of turning a lot of basketball into an individual branding space for kids,” Williams said. “[NIL] is creating an energy that forces [kids] to worry more about their individual accolades, as opposed to the team concept of winning and losing, which generates more of an individual mindset, whether it’s about highlight reels or the focus being on the camera man, the tweets, or interviews. All that stuff is on steroids right now.”

Williams said he understands the industry is in the early stages of change and that young athletes will need to learn to navigate this new world. Still, NIL can be an added responsibility and time commitment. Being a young athlete is no longer just about the game.

The pressure to perform at a high level on the court can be overwhelming to young athletes. Adding the pressure to maximize one’s personal brand and earning potential can create an unbearable level of stress for a teenager, according to Mantegna.

“I’m all for these kids getting what they can get. If you’re a top-level violinist at age 15, you can get paid to go to Carnegie Hall and play your violin, so I’m totally for it. But I think the hard part is staying hungry, staying humble, and continuing to work on your craft, because there are other kids that are, not to mention all of the kids overseas that are embedded in these academies or playing with pros.”

What the Future Holds

In theory, athletes should only benefit from NIL, but deciding which business deal is the best fit and negotiating that deal can be difficult at a young age and could lead to teenagers being exploited if they are not careful.

“I think more and more people need to be well-versed and learn what this could do for their son or daughter or their team or individuals on their team,” said Massaroni, who believes that Stepinac was the first New York school to hire an NIL consultant for its student athletes.

“We did seminars for parents. There were lectures. There were materials given out. [Students] were allowed to individually contact the consultant,” he said. “Between me and my staff, we try to teach [our student-athletes] right now (that) there becomes a financial component to [the game], some life decisions. What do you want your brand associated with? Do you do every single deal that’s presented to you because there is money involved?”

Predicting what the high school NIL landscape will look like in the future is impossible. We only know for sure that the number of states that permit high school NIL deals will increase. As of December 2022, 10 additional state legislatures are considering whether to allow high school student-athletes to profit from their NIL.

Related: How College Athletes Are Making ‘Massive Decisions’ in the NIL Era

But there are other questions: Will more and more money be thrown at the top high school prospects, following the current model? Will prospects outside of the top 20 or 40 start to receive lucrative NIL deals? Will mid-level prospects with significant local followings receive substantial deals?

Williams believes the current market will correct itself.

“If anything, I think [the current NIL trend] will go in the opposite direction, in which the agents stop dealing with kids at such a young age,” he said. “Because, the more you go into it, the more data you’re going to have. And you’re going to be able to say, ‘Hey listen, in the last five years, agencies signed kids who were juniors and sophomores in high school, and 2% of those guys actually made the NBA.’ So, I think agencies are going to start to have the analytics to (ask), ‘Is this worth it?’”

High school athletes don’t need NBA potential to be marketable, however. Mantegna and Massaroni each wondered whether hyper-local stars might be able to carve out lucrative deals for themselves.

“If you’re the best player at your little high school in Indiana, and there are 5,000 or 7,000 people on Friday nights in your gym in Indianapolis, even if you’re top 100 and you’re off to Butler or something like that, does that kid get an NIL deal just because he’s so impactful in his community and he’s so well known?" Mantegna said. “Even though he’s maybe not a future NBA player, he’s looked up to in the entire town. If I own a car wash in town, would I want this kid to be doing radio ads for my car wash? I wonder if that NIL world exists.”

“My whole thing is the unknown on what progress will there be if you’re not a top 50 player in this market?” Massaroni said. “I’d love to be able to try to expand it to 60 to 100 or top 200, or have a kid on a local niche because of Stepinac’s success or Christ The King’s success or Cardinal Hayes’ success or, you name it, South Shore. Somebody in Brooklyn is benefiting a kid who plays the hardest, for example.”

To help athletes navigate murky NIL waters, high schools could mimic the college blueprint and organize collectives of alumni and boosters who could fund and develop deals. This, too, could result in more deals for players outside of the top 20 players in the country and be a valuable recruiting tool for high schools.

More changes are sure to come – and fast. Basketball at all levels and age groups is as popular as ever for players and fans alike, and social media isn’t going anywhere.

The big-money NIL deals may not last forever, but the expansion of NIL to more young athletes, even in a lesser form, would drastically alter the landscape of high school athletics. As for the added distractions and pressure, the most successful high school athletes will get a head start living the lives of professional athletes, for better or worse, with the opportunity to at least create wealth for themselves rather than solely for others.

Nearly two years into the NIL era of American college sports, athletes have more financial freedom, while the industry is still in disarray.

We explore how different stakeholders, from athletic programs to universities to fans and boosters, can play a part in improving the system and the conditions of college athletes. 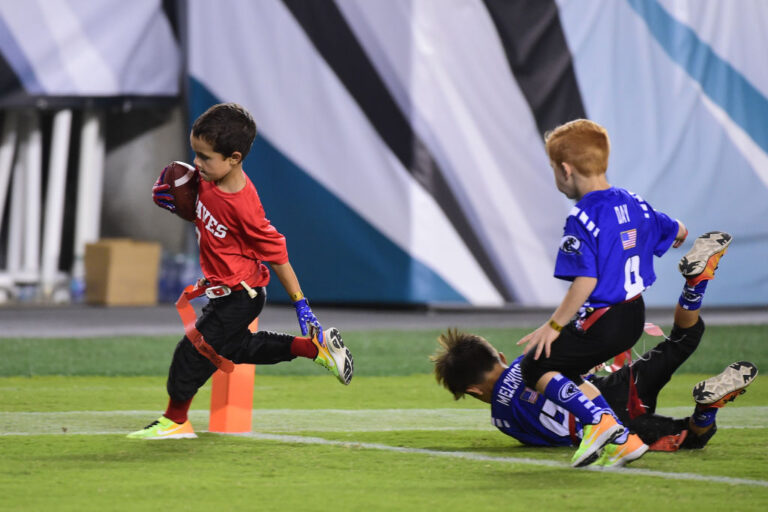