It's one thing for big-time Power 5 football players to find mental health help on campus, but in smaller Division II or III athletic programs, funding and staffing are in short supply.

I fell in love with tennis at the age of 6. The minute I stepped on the court, I knew this was my sport. I knew this is what I wanted to spend countless hours doing, traveling the country playing tournaments, and missing many school activities for tournaments and practices – all for the happiness and success I found in competing.

But at that age, I had no idea of the heartache and sadness I would later endure.

Everything came to a head two matches into my sophomore year of college tennis at a small, National Collegiate Athletic Association Division II school in the Midwest. I suffered posterior tibial tendonitis, an injury that brought my season to a sudden end. I was broken physically, mentally, and emotionally. All of my years of training and playing came to an abrupt stop. I contemplated my life and questioned my existence.

That may sound silly and extreme – but it’s the truth. Without the competitive routine and emotional outlet of tennis, I felt like a complete failure to myself, my teammates, and my university.

I was going downhill quickly. Division II athletes are reminded constantly that the emphasis is on the “student” part of the phrase “student-athlete.” In addition to our required hours of practice, my teammates and I had to manage many outside commitments for our coursework. We had to learn how to balance the athletic side of our lives with the standards of a liberal arts education.

After my injury, it was difficult to focus on academics. I still went to every practice and team activity, but it is a much different feeling to simply sit and watch others train and play the sport that you love and that has been such a central part of your life. A lot of those nights ended in tears of frustration. I wanted to be on the court with my teammates, competing for my school. I had never heard anyone discuss this part of being an athlete. I did not know where to turn. With very few resources available, I wondered why many NCAA schools – especially those in Division I and Division III – do not provide mental health services that are athlete-specific.

This question eventually became the focus of my graduate thesis, in which I studied the needs of sports psychologists at the college level by creating a survey of questions about mental health and sports psychology that the students at my Division II university filled out.

During the time of my injury and long recovery, I was fortunate to connect to the resources my university offered, and I received a great deal of support from my friends, coaches, and other athletes. They would check in with me often and try to spend time with me every few days to get me out of the funk I was in. They could tell I was not OK.

But what happens if a college athlete is not as fortunate as me? What happens if they truly believe they are a failure and they are ready to leave this Earth because they no longer can find their place? These are questions that every university athletic department and university staff member should be asking, especially as each week seemingly brings another headline of a death by suicide among collegiate athletes.

A Lack of Resources

I surveyed 174 college athletes for my thesis survey and asked questions relating to my university, university services, and their time as athletes. In my research, the results stated that 143 athletes felt like their performance had been hindered at least once a week due to mental health. In other words, 82 percent felt they could not perform their best due to mental health. What happens if a bad mental health day takes place during the game or match of the year? What happens if athletes decide that they have had too many of those days and have suicidal ideations? What happens next?

Friends of mine who played at mid-major Division I universities had access to sports psychologists and could see one whenever they needed. But Division II and III schools generally don’t have comparable funding and resources. According to the NCAA, median athletic expenses for Divisions II and III in 2021-22 were $6.8 million and $2.4-4.4 million, respectively, while for Division I schools in 2020 that number was anywhere from $17 million to $120 million.

Many universities offer free counseling and other similar services to the general student body. But most of those counselors and psychologists do not have training in the sports component that college athletes seek. I have worked with therapists before who were amazing, but when I asked for performance-specific advice and guidance, they did not know where to even begin. At my university, counselors had expertise in different areas, but none had a sports emphasis.

This makes a difference. One counselor once tried to address my requests by showing me a YouTube channel of a man discussing his performance habits and meditation techniques. Another actually told me – at age 14 –to quit tennis because I sounded “too stressed out and burnt out.”

Since then, I have become more aware of the importance of finding a therapist that truly understands my academic and athletic habits and needs. Enter the sports psychologist. Sport psychologists address athlete performance and well-being, the developmental and social aspects of sport, and systemic issues associated with sport. They help athletes address their personal and career development and provide them with coping and other psychological skills.

Mental wellness is essential for everyone on campus, but athletes can have added stressors when compared to other students. Think labs, assignments, traveling for tournaments, and practices. It’s a lot to keep track of. For me, it was a phenomenal night if I got more than 7 hours of sleep before I repeated everything the following day.

In researching my graduate thesis, I realized that stigma is the primary roadblock to progress around mental health in sport. When I played, there were times that I was afraid of saying something for fear that it would be seen as being weak – and I know that I’m not the only athlete who has ever had that concern. But that fear can work against health and well-being. Since March, there have been at least five college athlete suicides. This should be a giant wake-up call for the NCAA and its schools. This must stop, and athletes must not be afraid to ask for help.

In the 2021 fiscal year, the NCAA as an organization reported $1.15 billion in total revenue, most of that derived from selling the television rights to the Division I men’s basketball tournament. Meanwhile, athletic departments at NCAA schools generate an estimated $18.9 billion in annual revenue. The association and its members need to put more of that money into: a) reducing stigma by better educating athletes about mental health and b) making sure athletes at every level of collegiate competition can access sports-specific mental health guidance to cope with everyday issues. Division I athletes may be the televised face of college sports, but they are not the only ones struggling.

Please see our list of Mental Health Resources if you are seeking information or assistance regarding mental health. 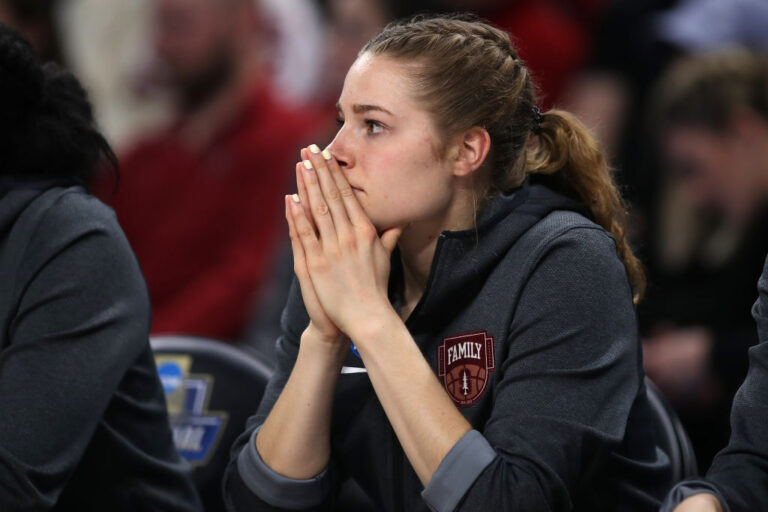