Capitalizing on the success of the Tokyo Paralympic Games, Asian American community organizers in Southern California organized a Paralympics Day this spring to raise awareness and support for adaptive athletes.

After I returned from volunteering at the postponed 2020 Tokyo Paralympics with World ParaVolley, I found a post on Twitter that caught my eye. It was a deadline reminder from the Asian Pacific Community Fund (APCF) in Southern California to apply for the Firecracker Fund grant program for 2022.

Inspired by the amazing progress made in Japan to highlight and amplify disabled sports and to recognize the benefits sport programs provide to persons with disabilities, I clicked. The fund, which promotes health, fitness, and cultural awareness in greater Los Angeles, along with its signature event, the Firecracker 10K run, sparked an idea. It also triggered some emotions thinking about how disability was viewed when I was a child growing up, and how much has been learned about ways to create opportunity through sport to enhance diversity and equity in life. I imagined using the success of the Tokyo Games to create a way for the AAPI communities in Southern California to connect to the world of adaptive sport as we inch closer to hosting the first Paralympic Games in Los Angeles. The APCF and the Firecracker Fund could be my way in.

I started learning how to scribble with my crayons when I was around two years old. In those early years, my left hand somehow naturally became my dominant hand for writing, throwing the ball, picking up mangoes from my grandparent’s tree, and even learning to swim I used to breathe only on my left side, unlike the other kids who followed the coach and breathed from the right side. I played tennis left-handed, reached for things off the shelf with my left hand, and learned to play most sports favoring my left side and eventually becoming ambidextrous. But when it came to using chopsticks, using my left hand was not an option. Though more widely accepted in today’s Asian culture, when I grew up in the 1970s and 80s, there was a stigma with being left-handed. It was considered “rude” or “evil,” and children were often converted to using their right hands. I grew up in Hawai’I, where I was embedded in a vibrant Asian American and Pacific Islander culture, but that didn’t mean I escaped the occasional slap on the wrist when I reached for my chopsticks with my left hand. So, I became right-handed.

A schoolmate’s parents once explained to me that being left-handed meant I was “different.” And being different was not exactly a good thing in their opinion. I felt that to my core. I didn’t look like the other Japanese kids, and of course, I wasn’t. I was part Japanese and (larger) part Native Hawaiian. I was taller and heavier than the other kids, had darker skin, curlier hair, wider and much bigger feet. I was seen as different even before I started using my left hand. But we never talked about those differences much. My mother, nearly 8 years later, would give birth to another daughter, who is proudly left-handed and arguably the most creative and artistic in our family – who does most sports right-handed. Until recently, I think many of our older relatives thought we were cursed.

Coming across that post from the APCF led to an opportunity to create something new in celebration of the athletes, sports, and outcomes of the Tokyo Paralympics. Through a unique partnership between the Firecracker Fund, Angel City Sports (the adaptive sport non-profit where I am on the board), and a few friends from Hawai’i who are active in the Southern California AAPI communities, the Firecracker Fund Paralympics Day was born.

The idea was to create an opportunity for outreach, and provide a way to raise awareness within and make connections to the world of adaptive sports. By making those connections, perhaps we could encourage more conversation and action. Action could be in the form of starting a new community adaptive sport team or finding new athletes to join ongoing programs like wheelchair basketball, athletics, sitting volleyball or more. Maybe some of the new athletes would even one day compete in the annual Angel City Games, the largest multi-para sport event in Southern California.

At Angel City Sports, I’ve been fortunate to learn from its young co-founder Ezra Frech about the humanitarian aspects of adaptive sport. To see firsthand how families with children who are living with and without disability can come together and compete on the same wheelchair basketball team, play goalball together with friends, and even learn and play sitting volleyball together regardless of age or ability. To find in each other a support system based on shared experiences, not unlike any other support system in our lives. We would use the existing format of the Angel City Sports “Paralympic Sports Day” free adaptive sport clinics to focus on increasing our outreach and letting AAPI communities know that if they were seeking opportunities for people living with disability, a great option was to try adaptive sport. Inclusive, adaptive sport where people participate together in a culture that welcomes those living with and without disabilities. Even if we didn’t win the grant, this was still an idea worth exploring, to normalize the conversation about disability in the AAPI communities, to break the stigmas about disability, and to provide some options for those interested in trying something new like adaptive sport.

Imagine my surprise, when two lovely women named RuthAnn Chou and Gloria Gee reached out to me several weeks later and informed me that Angel City Sports had been awarded the Firecracker Fund Grant for 2022. I was in complete shock, followed by complete joy and profound appreciation. For weeks, the team at Angel City Sports, supported by the pro bono work of the HOGO corporation, and fueled by companies like Panda Express, Molten USA, King’s Hawaiian Bakery, adidas, Café Dulce, Fox Sports LA, and Farmer John LA, developed a first-of-its-kind adaptive sport event at the Terasaki Budokan in the Little Tokyo area of Downtown Los Angeles.

The Firecracker Fund Paralympics Day on April 23 offered attendees the opportunity to learn and play six Paralympic sports, blind soccer, goalball, sitting volleyball, wheelchair basketball, rowing, and table tennis, coached by top pros and Paralympic athletes themselves. All equipment to participate was provided by Angel City Sports, through generous support from ongoing sponsors like The Hartford and Hanger Clinic who regularly donate sport-specific wheelchairs, blades and other adaptive equipment to help with accessibility. For many families, this was their first experience with adaptive sport, first time to see their kids playing together, and a chance to meet and greet other AAPI athletes, coaches and volunteers.

As part of the day’s festivities, the eight Paralympians coaching with Angel City Sports were recognized with their official “PLY” post-nominal designations. The International Paralympic Committee introduced the PLY initiative ‘to recognize the Paralympians’ contribution to the Paralympic Movement through their hard work, commitment to and promotion of the Paralympic values.” Among those receiving their PLY recognition at the Firecracker Fund Paralympics Day included:

Some local Olympians joined the volunteer team, like Olympian Liane Sato, and brother Glenn, who brought players from their Santa Monica High School boys’ junior varsity volleyball team. The boys jumped right into the mix and helped out with sitting volleyball after assisting Paralympian Brown with kicking off blind soccer. Liane is an Olympic bronze medalist (volleyball), a two-time Olympian and a member of volleyball’s “First Family” which includes brother Eric, an Olympic gold and bronze medalist (volleyball), Glenn who helped coach the 1990 USC men’s volleyball team to the NCAA National Championship, and Gary who coached both Liane and Eric to Olympic gold and bronze medals. Their family is prominently featured in the Terasaki Budokan display case as among the first Asian American Olympic sports stars from Southern California.

Becky Kim, a 2008 Olympian in artistic swimming, and a member of the Ohio State University Athletics Hall of Fame, came to show her support. Kim is a long-time supporter of Angel City Sports and brought her family to participate in the Firecracker Fund Paralympics Day, connecting with many first-time attendees and sharing her love of all things sports. Kim was part of the Ohio State teams that won collegiate national titles in 2004 and 2009, when she was honored as the U.S. Synchronized Swimming Collegiate Athlete of the Year.

Candace Cable PLY, an Angel City Sports ambassador and advocate, checked in to lend her support and encouragement to returning and new adaptive athletes. Cable is one of the most decorated multi-sport Paralympians in the world, and the first American woman to compete and medal in both Winter and Summer Paralympics. She’s won a combined eight Paralympic medals, including gold, silver and bronze, and was the winner of the first four Los Angeles Marathons, and six Boston Marathons in the women’s wheelchair division. She always makes time to coach, contribute, and share her wealth of knowledge about activism, advocacy and para sport. Her time with these young athletes is very impactful, her presence is a huge confidence booster for them, and her encouragement may one day result in one of them sharing the podium at a Paralympic Games, or working behind the scenes and becoming a life-long ally of those participating in adaptive sport.

Goalball Paralympian Hukang, who cites Olympians Kristi Yamaguchi and Michelle Kwan as her inspirations to pursue elite sport said about her ability to be in a similar position to youth, “Through my experience with sports and having these opportunities for growth and seeing ways that other people really stepped up as mentors for me is really inspiring.

“That’s what sports and adaptive sports primarily are all about is…being able to pass on that information.”

With just over 100 people in attendance, having the opportunity to introduce the Firecracker Fund Paralympics Day, and to share Angel City Sports’ “learn and play” format for adaptive sports with new athletes, parents and volunteers exceeded expectations. It was especially significant to showcase some of the most popular Paralympic sports in the Terasaki Budokan, a community-based gymnasium and multi-purpose event space in the heart of Downtown Los Angeles. It was only a few years ago, before their grand opening, where we stood on the steps of Los Angeles City Hall around the corner to celebrate the official news that Los Angeles would again host the Olympics in 2028, and the Paralympics for the first-time ever. And to see so many new faces from the AAPI communities enjoying adaptive sport and interacting with new friends is one of the many reasons why representation matters. 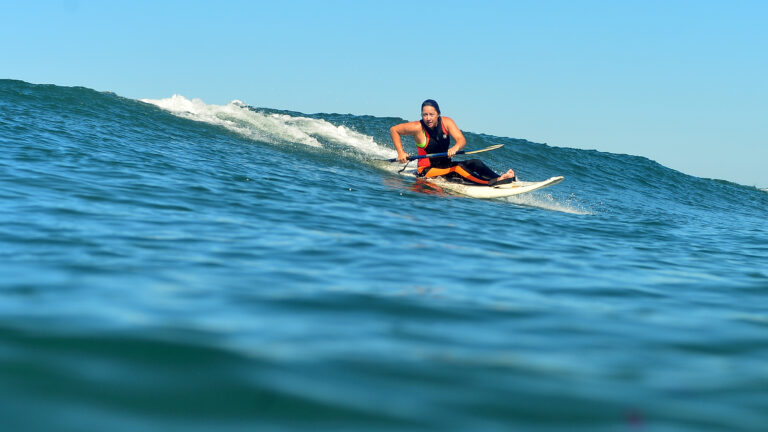