As America reels from a year of racial reckoning, we began to wonder how much do fans actually know about the NFL and its own diversity?

A survey by OHPI in partnership with the Global Sport Institute of 1,800 people across the United States highlighted the continued popularity of the NFL and the Super Bowl as well as a lack of understanding around the league’s efforts, as well as respondents’ belief that the league should do more to support its minority coaches and players.

The poll found that nearly half of respondents were “super fans,” or people who watch NFL games at least once per week, and more than 70 percent of respondents plan to watch at least part of Super Bowl LV on Feb. 7. So coming off a Super Bowl in 2020 that ranked as the 11th-most-watched program in television history, the NFL is riding high heading into the big game during the pandemic. But those polled challenged the league on many of its efforts to even the playing field and empower people across it.

However, very few respondents had a deep understanding of the current NFL rules on hiring. Nearly half said they were “unsure” what was included in the Rooney Rule, compared to just 39 percent who correctly identified the nature of the rule. Once respondents were informed of the rule -- which requires that teams interview at least two minority candidates be a head coach and one for GM, front office, or coordinator openings -- the proportion of those who believe the NFL needs more head coaches of Color increased by three percentage points. 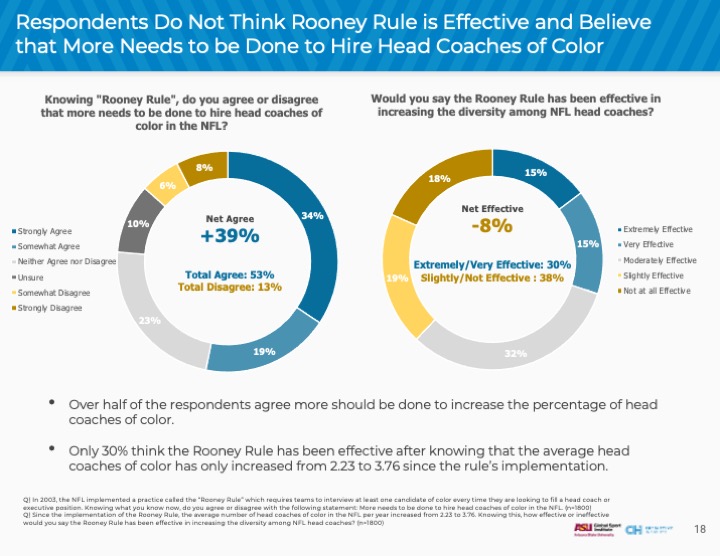 This despite another round of coaching hires in which coach candidates of Color got short shrift and less experienced coaches like the Chargers’ Brandon Staley or the Falcons’ Arthur Smith. The most frequently named Black coach to not get a job in recent years, Chiefs offensive coordinator Eric Bieniemy, has been the coordinator in Kansas City for just three years, falling short of the five-plus year criteria established by respondents in this poll. However, NFL lifers such as Jim Caldwell, Raheem Morris, and Todd Bowles have yet to get another chance as head coaches after recent firings. 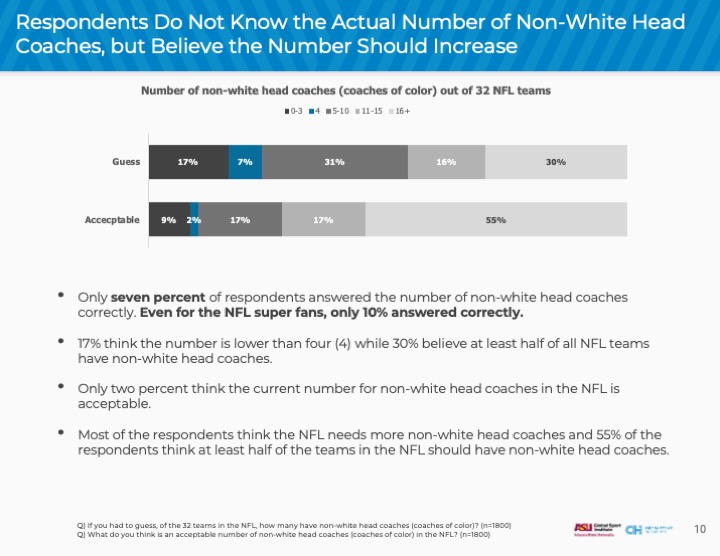 Just three seasons ago, the league had eight such coaches, a record. That number has been cut in half, and it’s hard to find progress right now. In a recent statement, the Fritz-Pollard Alliance wrote, “the issue is not in the sufficiency of numbers; the problem is in the limited number of leadership opportunities given.” The alliance is a non-profit that champions diversity in the NFL and has frequently criticized hiring practices for high-level positions in the league.

Respondents agreed, as 38 percent said the Rooney Rule was not effective after learning how hiring decisions largely stayed the same after its implementation.

While hiring gets the most attention because of NFL teams’ failure to live up to the expectations of fans and stakeholders, those polled by OHPI and the Global Sport Institute did believe the NFL was more inclusive regarding the Movement for Black Lives than other pro sports leagues. More than a third believed this compared to just 12 percent who believe the league is less “inclusive” on these issues than other leagues.

The alleged “blackballing” of Colin Kaepernick still looms large over the league, but in the wake of the death of George Floyd and subsequent protests over police brutality and institutionalized racism in America, the NFL became more accepting of on-field protest and committed $250 million over 10 years to “combat systemic racism.” Commissioner Roger Goodell even declared on video that "Black Lives Matter" and agreed to play “Lift E’vry Voice and Sing,” also known as the Black national anthem, before each game this season.

Worth noting is that casual fans, African-American respondents, and Southerners were all more likely to challenge the NFL’s inclusiveness on issues of racism than other groups.

Altogether, the respondents were 51 percent female, and 30 percent of those polled were between the ages of 18 and 34, the largest such proportion. Of those surveyed, 20 percent said they do not watch sports at all, and 11 percent came in with a “very unfavorable” view of the NFL.