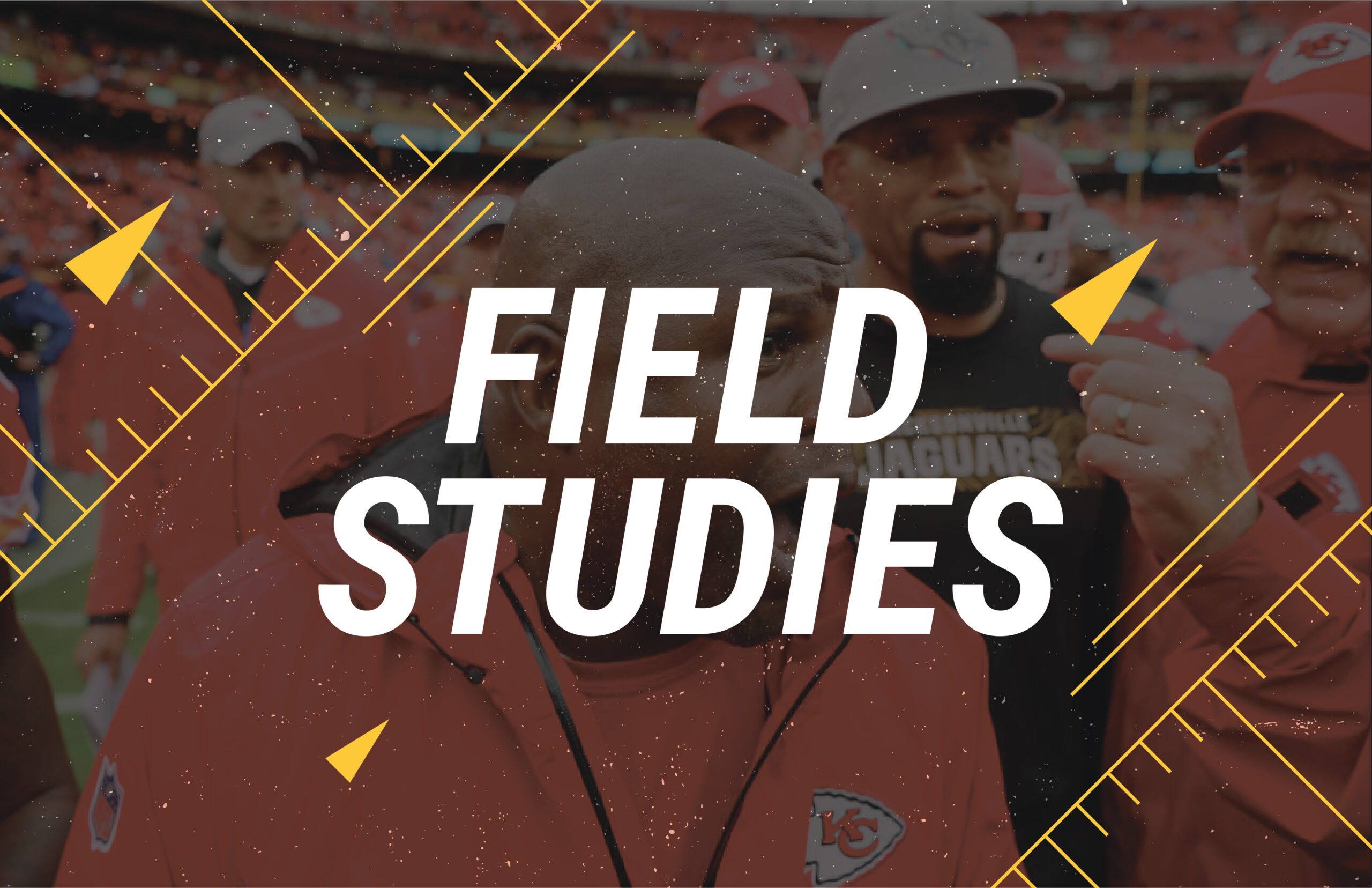 What are the similarities and differences for coaches of Color and White coaches?

The NFL’s Rooney Rule, established in 2003, has required franchises to interview candidates of Color for senior football operations and head coaching positions. The purpose of this report is to describe coach hiring and firing patterns and pipelines leading to head coaching and to expand our original analyses to include seasons from the start of the Rooney Rule. The data in this study indicated differences in pipelines and pathways, experiences, and opportunities. The analyses provided details to the racial/ethnic composition of the 18 seasons since the Rooney Rule was implemented and answered the question posed above.

The first figure below shows the big picture of total NFL head coaches broken down by race for every season from 2002-03 through 2019-20. The figures that follow show factors that contribute or offer context to this big picture. Several factors involve offensive and defensive coordinator positions, which head coaches often hold before and after their head coach stints. Other factors include football playing experience, age when hired, franchise hiring histories, and new hire data.

These figures show snapshot comparisons of newly-hired NFL head coaches broken down by race in 2002-03 vs. 2019-20.

These figures display the last job held before being hired as an NFL head coach between 2002 and 2020.

This figure shows the role held by NFL offensive coordinators immediately prior to their new hire.

This figure shows the role held by NFL Defensive Coordinators immediately prior to their new hire.

This figure displays “next” jobs for defensive coordinators who have exited a team.

This figure shows the percentage of OCs hired by race/ethnicity from the 2002-03 through the 2019-20 seasons.

This figure shows the percentage of DCs hired by race/ethnicity from the 2002-03 through the 2019-20 seasons.

This figure reflects the newly-hired offensive coordinators per season broken down by race.

This figure reflects the hired Defensive Coordinators per season broken down by race.

The Global Sport Institute published an analysis (Brooks et al., 2019) of hiring and firing trends of NFL head coaches, offensive coordinators, and defensive coordinators for the decade that spanned the 2009-10 NFL season through the 2018-19 season. In short, our report found that in the seasons analyzed while most coaches were former players, and most players have been men of Color, the vast majority of coaches were White. As measured by previous playing and coaching experience, coaches of Color had more robust statistics when hired than White coaches. Regardless of ethnicity, all outgoing head coaches achieved similar winning percentages. The age at the time of hire showed a wider range for White head coaches than coaches of Color, and White head coaches were also hired more frequently and for more senior positions after being fired. Lastly, offensive coordinators, the vast majority of whom are White, were much more likely than defensive coordinators to be hired as head coaches.

As we pursued a deeper understanding of the pipeline, the equity of hiring processes, the league and franchise organizational practices, and the persistence of disparate outcomes, we stepped back to analyze all head coach and coordinator hiring and firing from the year prior to the Rooney Rule going into effect in 2003 and expanded our previous analysis by six seasons. We also added the 2019-20 season.

All of the data presented have been gathered from publicly accessible sources, such as news articles that report on coaches’ entrance into and exit from positions. There were three phases to our research. The initial two rounds of data collection were done in 2018 for our first Field Study, a ten-year snapshot that analyzed the hiring patterns of head coaches, offensive coordinators, and defensive coordinators during the 2009-10 – 2018-19 seasons. The first round was data collection and preliminary analysis done by the Paul Robeson Research Center for Innovative Academic & Athletic Prowess (PRRC). PRRC, under the direction of Dr. C. Keith Harrison, compiled data from all changes at head coach, offensive coordinator, and defensive coordinator levels in the NFL. The data included information on the race/ethnicity of both hired and fired coaches, prior coaching position, and next coaching position (in the case of the coach leaving the position). This phase was followed by additional analysis of the PRRC data and a second round of data collection. Global Sport Institute added age, playing experience, and basic descriptive statistics, and conducted a second analysis of all the data.

For the present study, a third round of data collection and analysis was done solely by the Global Sport Institute. The 2002-03 – 2008-09 seasons were captured along with the 2019-20 season. The 18 seasons of data in this report included detailed breakdowns of the following for head coaches, defensive coordinators, and offensive coordinators: race or ethnicity of incoming and outgoing coaches; positions prior to and after stints as coach or coordinator; age at hire; previous playing and coaching experience; winning percentages; length of tenure as coach or coordinator; and next job after leaving a coaching position. An important methodology update was in how offensive and defensive coordinator vacancies were counted. In the previous study iteration, if the position was left unfilled, the head coach was determined to occupy that vacancy, and therefore, his descriptive data were used. In the current study, no data were entered for vacant outgoing or incoming offensive or defensive coordinator positions.

All figures represent data captured prior to the start of the 2020-21 NFL season, in order to capture hiring and firing outcomes of the completed 2019-20 season. Figures do not represent any coaching changes that happened during the 2020-21 season. In our analyses, we defined “hires” as officially-hired coaches who were not designated as interim. We excluded interim coaches because, by definition, they are temporary and transient in nature and therefore may add variability to the data that is not representative of actual hiring patterns. However, if a coach started as interim and was the official subsequent hire, then he was included in this data set.