The Chief has had his final at-bat in Major League Baseball as the logo and character have been removed from the Cleveland Indians’ spring training facilities. In 2018, the team announced the retiring and removal of their longtime (and controversial) logo, Chief Wahoo.

“It’s about time; we’ve been after them for years,” said 81-year-old Clyde Bellecourt, a member of the Chippewa tribe.

Starting in 2019, Chief Wahoo will be gone from all gameday uniforms and will no longer be used by the team at Progressive Field in Cleveland, Ohio. The team had a long history with the Chief but ultimately decided it was time to move on.

Originally named the Blues in 1901 when they joined the American League, the team was renamed the Cleveland Naps in 1903 in honor of player Nap Lajoie. After Lajoie left the team, baseball writers helped rename the team the Cleveland Indians. In 1932, the Plain Dealer began publishing strips focused on the team’s outcomes and featured a Native American character. 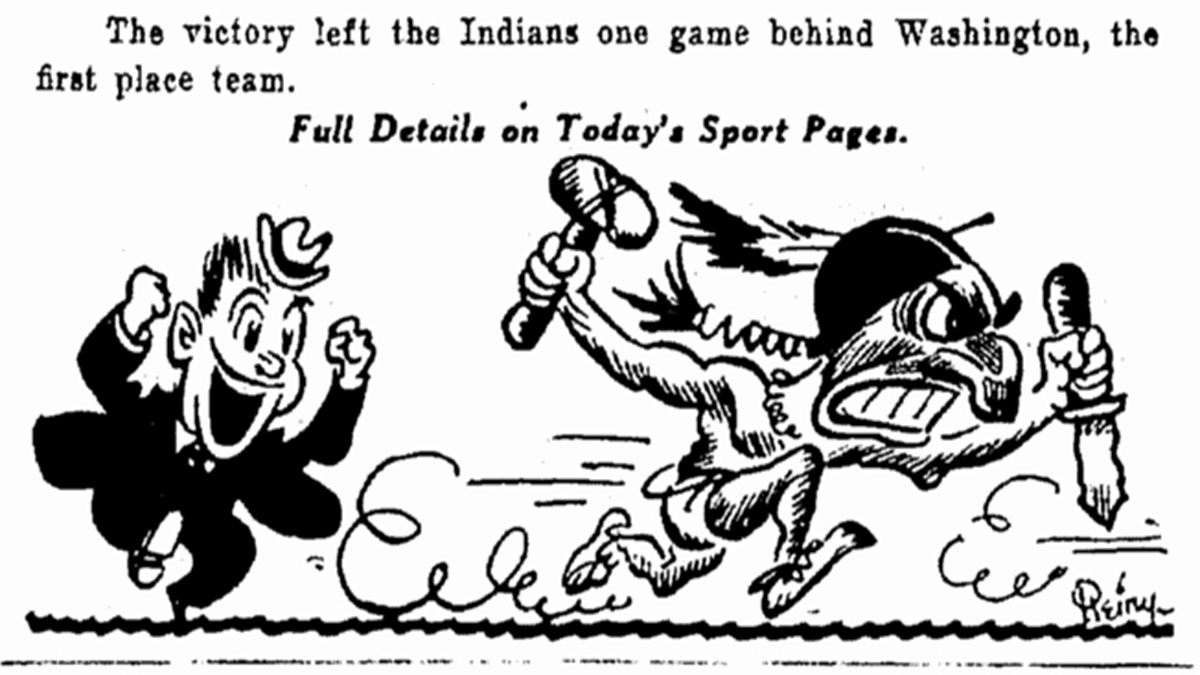 Others trace Wahoo’s lineage to 1946 when a 17-year-old named Walter Goldbach designed a logo caricature that was later commissioned and used by the team.

Bill Veeck, then owner of the team, called the graphics store his uncle owned in 1946 and said he was looking for a new logo for his team.

No official record exists of how the name Wahoo was selected. But the logo underwent numerous makeovers through the decades as it became an icon for the team and the city of Cleveland.

During recent decades, protests against the Cleveland Indians team name and Chief Wahoo logo have been regular occurrences. Home openers at Progressive Field are usually accompanied by activists who have wanted to get rid of the icons and the racism they represent to the Native American people.

Paul Hoynes, The Plain Dealer’s Cleveland Indians beat writer said of the protestors on opening day 2019, “I imagine they’ll be back this year because I believe they want the name [along with Wahoo] changed as well.”

In 1947, team owner Bill Veeck signed Larry Doby as the first African American player in American League baseball history. Then, according to his autobiography, “Veeck as in Wreck,” law-enforcement told him he could not sit in a segregated section in the bleachers at a spring training game in Florida. The issue reached the mayor and Veeck was threatened to be removed from the ballpark according to a city ordinance.

Veeck responded, “‘I don't know anything about that,' I told him. 'What I do know is that if you bother me any more we'll move our club out of Ocala tonight. And we'll tell everybody in the country why,' ” adding, “I sat there every day, just to annoy them, without ever being bothered again. Nevertheless, I had already made up my mind to get out of Florida.’”

Later Veeck moved the Indians to Tucson, Az., where the team would hold spring training until 1993 when the franchise decided to move back to Florida.

The calls for Chief Wahoo’s elimination increased in 2014 when the editorial board at cleveland.com wrote an editorial to bring an end to the controversial logo.

“(Removing Chief Wahoo) will understandably disappoint many Tribe fans given the emotional hold the smiling big-toothed, big-nosed cartoon Indian has had on them for more than 60 years. But it’s time to acknowledge once and for all that the caricature represents a racially insensitive stereotyping of Native Americans,” the editorial posited. “The Indians -- the baseball variety -- defend the smiling Wahoo as a benign symbol of the great American pastime, yet they have tacitly acknowledged its offensive characteristics by reducing Wahoo’s role in the team marketing over the years. It’s time for a clean break.”

The reduction the editorial referred to was the removal of Wahoo from the team’s away cap in 2011 and then from the home batting helmets in 2013. Next, Chief Wahoo was moved to the arm sleeve and in 2016, the Indians announced they would use a text block C as their primary logo moving forward.

NEWS: The Cleveland Indians have officially made the block C their primary logo. "Chief Wahoo" will now be 2nd logo pic.twitter.com/hdlPbRJnkW

Later in 2016, Cleveland was playing in the American League Championship Series against the Toronto Blue Jays. As the Indians prepared for the series, one Toronto native was preparing for a fight all his own. Douglas Cardinal, an American Indian activist and designer of multiple Native American museums, was filing a request to stop the team from bringing Chief Wahoo to Canada, claiming the team name and logo were discriminatory.

“That logo is really outrageous and racist and offensive to all of our native cultures,” Cardinal told USA TODAY Sports at that time. “It is about time that people who have been here for thousands of years, living in harmony with the land, be able to have their rights recognized. It doesn’t help when they have these images perpetuate racism and ridicule.”

Cardinal ended up losing his bid, and the Indians used the name and logo during the ALCS.

“(That case) gave Rob Manfred the legal opening he was looking for and he really increased the pressure from that point,” Hoynes said. “Former commissioner Bud Selig had always believed these decisions were to be made by the clubs and not the league itself.”

That opening produced the 2018 removal announcement.

“Major League Baseball is committed to building a culture of diversity and inclusion throughout the game,” MLB Commissioner Rob Manfred said. “Over the past year, we encouraged dialogue with the Indians organization about the club’s use of the Chief Wahoo logo. During our constructive conversations, Paul Dolan made clear that there are fans who have a longstanding attachment to the logo and its place in the history of the team.

“Nonetheless, the club ultimately agreed with my position that the logo is no longer appropriate for on-field use in Major League Baseball, and I appreciate Mr. Dolan’s acknowledgement that removing it from the on-field uniform by the start of the 2019 season is the right course.”

The team, however, still owns the trademark and retail rights to Chief Wahoo and will continue to sell merchandise with his face on it at games and team facilities.

The conversations concerning Chief Wahoo included talks about the team possibly moving on from the controversial Indians name, too. Team owner Paul Dolan had no intention of moving on from that name even though some people within the organization reportedly felt the logo represented a controversy.

“Owner Paul Dolan in his negotiations with Manfred refused to change the name of the team even though Manfred pushed for it. Internally, many front office people have wanted to dump Chief Wahoo for years, but they were afraid to do it because of fan backlash,” Hoynes said. “They felt it was a racist logo. They never said that publicly. Still, I can’t see the organization changing the name of the team as long as the Dolan family owns it.”

Even without the name being changed, the organization received plenty of mixed reactions with the announced removal of Chief Wahoo.

Cleveland: you are a great city, a great #baseball franchise, a great history. You’re better than this. Lose #ChiefWahoo now #BlueJays

It blows my mind how people are actually this hurt over a professional sports team logo. It has always been chief wahoo, and it's just sad that it needs to be changed because of how soft our society is. #KeepTheChief

I’m sorry but if we’re getting rid of the chief we are gonna have to change all the names that make up our state like CUYAHOGA and ASHTABULA and idk maybe LAKE ERIE, 2nd thought let’s change the name of OHIO too. We’re built off native history. This is ridiculous. #KeepTheChief

If Dolan were to change the name of the team, what would it be changed to? How would fans and Ohio natives react to the changes especially after the reactions from the removal of Chief Wahoo?

“Speaking from the majority of fans I’ve been in contact with, they wanted the organization to keep Chief Wahoo and people are still upset about it, but it seems to be fading,” Hoynes said. “From a journalistic standpoint, it was probably time for The Chief to go. I hate to say that, but Bud Shaw, who retired last year from Cleveland.com/The Plain Dealer said if the Indians were holding a contest today to pick a new logo, Chief Wahoo would never be selected. That struck a chord with me.”

In an article written by Jack Moore, four suggestions were made for what the team could possibly switch to if it was to get rid of the Indians moniker.

Moore suggests even though Buckeyes is already in use by Ohio State University, it could provide a historically and socially correct logo. The Negro League team from Cleveland was called the Buckeyes, and that team won a Negro World Series, providing a name that would honor past teams.

He also suggested the Guardians, named after the Guardians of Transportation from the Hope Memorial Bridge in Cleveland.

Formally adopting the Tribe nickname, although still controversial, would provide immediate relief from a racially insensitive team name and would switch the team to a name that many fans already use.

The Spiders nickname -- just like the Buckeyes -- has connections to Cleveland. The Spiders were the nickname of one of the teams in the city before the Indians were established.

Hoynes had one minor issue with this suggestion.

“People have suggested changing it to the Cleveland Spiders, an old National League team that played in Cleveland a long time ago. But they were terrible.”

Nonetheless, the Indians will play on, and they aren’t the only team that faces controversy for their names or logos. Teams such as the Florida State Seminoles, Kansas City Chiefs, Atlanta Braves and Chicago Blackhawks are all considered to be racially insensitive to Native Americans, but none more controversial than the Washington Redskins.

Through the years, schools and teams around the country have changed their controversial names and mascots. And groups across the country continue fighting on behalf of Native American culture against the use of racially insensitive logos and mascots in American sports. 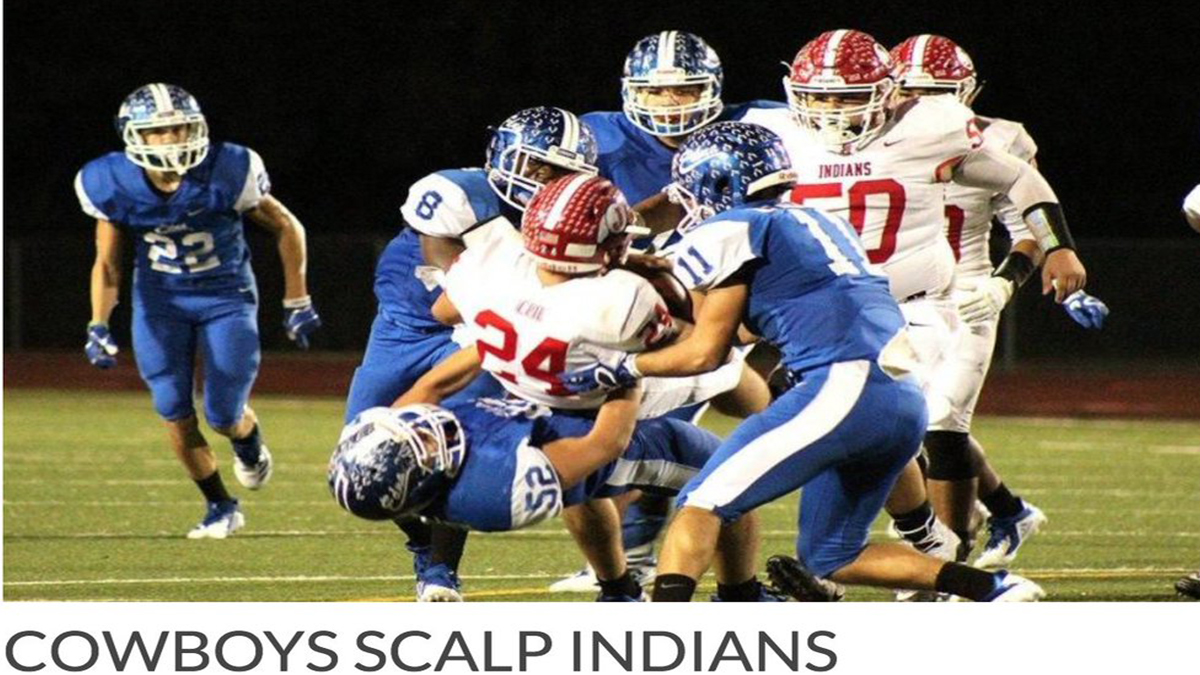 One of the main groups -- and one of the oldest -- is the National Congress of American Indians (NCAI), whose main goal is to end the era of harmful “indian” mascots in sports. Two of the group’s biggest fights in their Change the Mascot Campaign were the Washington Redskins and the Cleveland Indians.

“The Cleveland baseball team has rightly recognized that Native Americans do not deserve to be denigrated as cartoon mascots, and the team’s move is a reflection of a grassroots movement that has pressed sports franchises to respect Native people,” said Oneida Nation Representative Ray Halbritter, leader of the Change the Mascot campaign.

“Washington owner Dan Snyder needs to look at Cleveland’s move and then look in the mirror and ask whether he wants to be forever known as the most famous purveyor of bigotry in modern sports, or if he wants to finally stand on the right side of history and change his team’s name. We hope he chooses the latter.”

There are two sides to every battle and people must decide which one they fall on.

“I believe, based on copyright laws, Paul Dolan could have fought MLB and kept Chief Wahoo just as Dan Snyder has fought the NFL to keep the Washington Redskins logo.” Hoynes said, “I resent outside forces telling an individual business what to do. But I would tell an organization, if they feel strongly about their case, and they believe they’re representing the majority of their fans, to fight any move they felt was intrusive to their team.”

Dustin Paré is a journalism student at Arizona State University.