For centuries a national anthem has been a symbolic representation of a nation with its deep roots to the culture, people and language. For an athlete, hearing the national anthem played can be a proud moment.

From Africa to Australia and from South America to Asia, national anthems are still being played to this day at schools, cinemas, military bases and before the start of sporting events.

Although there is no legal requirement in the U.S. to do so, it is common practice when “The Star-Spangled Banner” is played that individuals stand, put their right hand or hat over their heart and face the flag as a sign of respect.

In 1918, nearly 13 years before President Herbert Hoover officially signed the bill making “The Star-Spangled Banner” the national anthem of the U.S., a band at Chicago’s Wrigley Field played the anthem during the seventh-inning stretch of the World Series opening game between the Boston Red Sox and the Chicago Cubs.

According to The Washington Post, when the series moved to Boston, Red Sox owner Harry Frazee ordered the anthem to be played at the start of each game.

In the weeks after World War II ended, NFL Commissioner Elmer Layden ordered all the teams in the league to play the anthem.

“The National Anthem should be as much a part of every game as the kick-off. We must not drop it simply because the war is over. We should never forget what it stands for,” he said according to Time Magazine.

Before 2009, NFL teams playing in prime-time games remained in the locker room due to TV timing concerns. Games that kicked off at 1 or 4 p.m. ET already had players on the field ready to go for the game, so they stood for the anthem. The 2009 change brought prime-time games in line with day games. According to Brian McCarthy, an NFL spokesman, part of the confusion over anthem protocol may be that television networks often haven’t shown the national anthem being played.

Soon after, an alliance was quietly created among the U.S. military and leagues and teams across the American sports world. From 2012 through 2015, all military branches spent more than $53 million of taxpayer money on marketing and advertising contracts designed to market patriotism via the “ceremonial first pitches, honor guards and Jumbotron tributes, that have been used for years,” according to the Pittsburgh Post-Gazette.

When the details and scope of the program leaked to the public in early 2015, the Department of Defense ended the practice. But the tie between sports, the military and patriotism had been forged.

In light of the current discussions surrounding the NFL’s decision to force players to either stand or remain in the locker room during the anthem presentation, it is worth exploring what practices surround the playing of their national anthem in other countries. 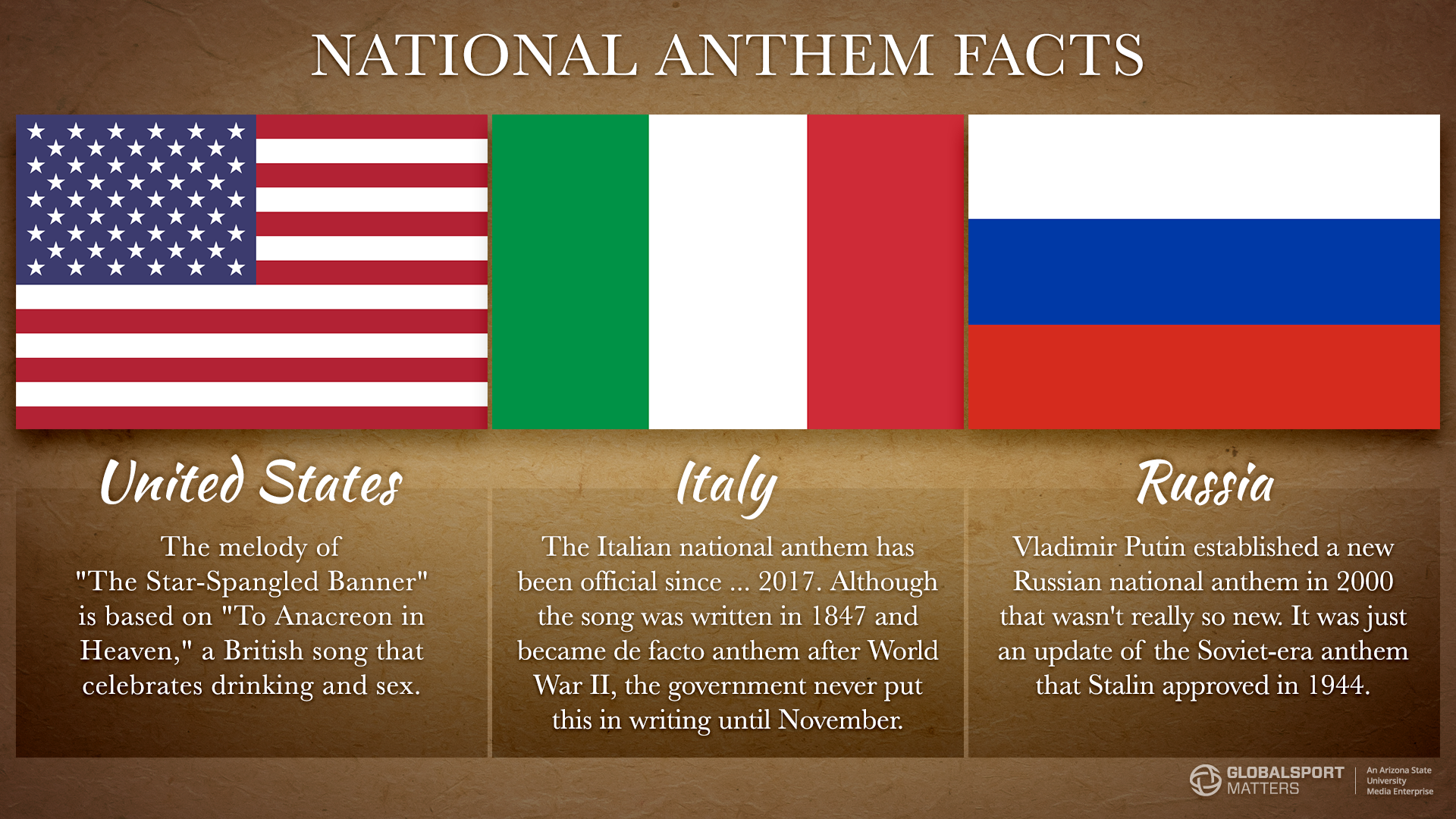 In 1994 then-President Nelson Mandela declared the Republic of South Africa would have two national anthems: “The Call of South Africa” and “Nkosi Sikelel’ iAfrika.” That lasted for three years.

According to the Republic of South Africa Department of Arts and Culture website:

“In terms of section 4 of the Constitution of South Africa, 1996 (Act 108 of 1996), and following a proclamation in the Government Gazette No. 18341 (Oct. 10, 1997), a shortened, combined version of Nkosi Sikelel’ iAfrika and The Call of South Africa is now the national anthem of South Africa. It is the only neo-modal national anthem in the world, by virtue of being the only one that starts in one key and finishes in another.”

Protocol dictates all should stand to attention with their hands placed at their sides while singing the national anthem. However, the president is the only one allowed to place his or her palm on the heart.

Some of the most popular places the anthem can be played or sung are government offices, schools and colleges; sports and cultural events; and special occasions or national holidays, according to Rajendran Govender, director at Kwa-Zulu Natal Department of Arts and Culture.

At the height of the 2010 World Cup in Johannesburg South Africa the government urged South Africans not to “move around, hold conversations or blow vuvuzelas” during their own anthem or the 31 other nations anthems.

Cities across the country are allowed to make their own regulations when it comes to the national anthem.

Japan’s national anthem — known as “Kimigayo” — has a controversial history. The national anthem was used as a way to praise the emperor who was known for militarism and a imperialistic society.

After World War II the emperor became a symbol to Japan by The Meiji Constitution of 1889 until it was rewritten in 1947. However, despite many objections from citizens the national anthem has remained unchanged and is still sung at “national festivals, international events, schools and on national holidays.”

As soccer and baseball are the most popular sports in Japan, the Tulsa Beacon reported that “players stand out of respect when the anthem is played. They don’t place their hand on their heart.”

India’s Supreme Court ruled in 2016 that all movie theaters across the country had to play the “Jana Gana Mana” national anthem before the feature presentation although that decision was reversed in 2018 because of rising “vigilante patriotism.”

The State Emblem of India (Regulations of Use) Amendment Rules, 2010, already required the anthem to be played in specified places or occasions such as parades, any address the president gave over India Radio and at the start of school days, according to India’s CNN News 18.

As cricket is the most popular sport in India, standing and singing along is common courtesy, but those singing another country’s anthem can be detained. Four cricketers were detained for playing the Pakistan national anthem in two Indian cities, Jammu and Kashmir according to The Economic Times. It should be noted that both cities are in the disputed Kashmir region of India, long a flash point for hostility between Pakistan and India.

Under The Prevention of Insults to National Honour Act, 1971 people can be imprisoned for up to three years, face a fine or suffer both penalties if they intentionally show disrespect to the national anthem or burn, mutilate, deface, defile the Indian flag. According to ForeignPolicy.com, only recently the anthem has begun being played before sporting events.

In 1991, a year after reunification, that Germany adopted what is known today as the “The Song of Germany.”

The Wall Street Journal reported in 2010 that some of Germany’s national soccer team refused to sing the country’s national anthem during World Cup warmup matches.

The national team’s coach, Joachim Low, weighed in, declaring that he wouldn’t force players to sing if they didn’t want to. “Our boys identify totally with the national team and Germany, but one also has to consider their heritage,” Low said.

According to the South China Morning Post Germany has no national anthem law, but rules exist to punish “defamation of the state and its symbols,” including the anthem. The German criminal code defines “defamation of the state and its symbols” as “whoever publicly … insults the colors, flag, coat of arms or the anthem of the Federal Republic of Germany or one of it's states.” Violations can result in imprisonment not exceeding three years or a fine.

However, the criminal code does not define the word insult. And it does not offer guidance on how an individual is expected to behave when the anthem is played.

Goffredo Mameli wrote the first lyrics to Italy’s anthem in 1847, but wasn’t until 1946 that “II Canto degli Italiani” was chosen as the national anthem on a provisional basis after Italy became a republic.

To this day the national anthem is not played at schools or other public places except during sporting events, at formal state ceremonies and at public rallies attended by the President.

“Italians have been singing it before football matches and at military parades ever since though some have suggested replacing it with more solemn — though arguably, more tuneful — Va, Pensiero from Giuseppe Verdi’s opera Nabucco,” according to The Local.

The song, “Advance Australia Fair” was first composed by Peter Dodds McCormick in 1878, but wasn’t proclaimed as Australia’s national anthem until 1984.

Last year during a National Rugby League match between the Bulldogs and Cowboys two renditions of “Advance Australia Fair” were played. According to Sporting News an Indigenous version followed by the regular anthem in English.

The Russian hockey team faced a violation when they sang the Russian anthem while competing as neutral athletes after doping violations nearly forced the entire delegation out of the 2018 Winter Olympics in Pyeongchang, South Korea.

“O Canada,” composed in 1880 by Calixa Lavallee, was originally sung in French and proclaimed as the national anthem in 1980.

“When the first familiar chords of “O Canada” plays at schools, hockey games and other events, Canadians stand with pride in honour of their country,” according to the Government of Canada website.

Times Colonist explained why Canadians sing anthems at sporting events and why they along with Americans have to sing (or at least stand for) each other’s.

“We do it because, well it’s habit,” stated Times Colonist. “The National Hockey League decided in 1987 that both anthems must be sung whenever Canadian- and U.S.-based teams meet, cementing a practice that had been in common since the 1960s. Major league baseball and basketball follow the same rule (though it’s applied relatively rarely, each sport having only one Canadian team). Two-anthem games are common for Victoria’s Royals and HarbourCats.”

Protesting NFL players may have a case under First Amendment

Athlete activism is on the rise but so is the backlash