The unorthodox nature of an Olympian's athletic career means long gaps between competitions, and a massive spotlight at the highest levels. When athletes retire from competing, the lack of routine and structure can create an identity crisis and mental health challenges along the way.

It was August 14, 2016, and Niccolo Campriani’s world was filled with worshipful admirers. The 31-year-old Italian had just won his second gold medal in shooting in the 2016 Summer Olympics in Rio de Janeiro. Hosannas cascaded down on him.

Instead of spreading his arms and welcoming the blessings of friends, fans, and family, Campriani walked out of the shooting range that day wanting to immediately confess to the damage control his mind was doing and what it had taken psychologically to claim those gold medals. The three years leading up to the 2016 Games had been uneasy for Campriani. He struggled to find balance in his life. His passion for shooting had turned into an obsession, he said, and he did not welcome that his personal identity was tied so securely to his sport.

But people wanted to celebrate him that day in Rio. So, instead of revealing his soul, Campriani said, he took the easy way out and celebrated the way everyone wanted him to.

Almost six years later, when Campriani talks about Rio, he describes his experience as competing amid an identity crisis: Am I just an athlete? What is waiting for me out there?

It is a familiar refrain for Olympians, even the successful ones like Campriani, who was competing in his third Games. This kind of identity crisis can twist athletes into knots, their emotions hot and cold like a thermometer in the spring.

“The decision for many to stay in sport is not dictated by passion, but that the world out there is scary and they don’t feel ready for it,” Campriani said. “The bubble of the sport community is actually more comforting. Unless their body tells them to stop, they don’t stop.”

Psychologists have a term for what Campriani and others experience: “identity foreclosure,” which can occur when a person prematurely commits to a particular identity and unquestioningly accepts the role, values, and goals that others – such as parents, friends, teachers, and athletic coaches – have chosen for them.

“People devote their entire lives preparing to do these sorts of things, like the Olympics, and who are you when you are not doing what you have been doing for a long time?” said Dr. Ed Etzel, a 1984 Olympic gold medal winner in shooting and a licensed sports psychologist. “And who are you when you haven’t defined yourself in another way? Who are you when other people define you as some sort of hero?”

Dr. Megan Neyer, also a licensed sports psychologist, a 1980 Olympian, and the most accomplished athlete in the history of National Collegiate Athletic Association diving, wrote her dissertation at the University of Florida on the identity crisis athletes are confronted with after their competitive careers end.

“The first thing (athletes) have to do is they’ve got to reconcile whatever happened,” said Neyer. “They have to go through a period of reflection. It can take a day, a week, several weeks, or months. Mine took 13 months.

“They can’t skip that step.”

‘It Was Completely Unhealthy For Me’

From 2008 to 2012, Campriani said, his life was varied. His identity was not stuffed into the single silo of training Olympic athlete. He was a student at West Virginia University (engineering), and then a grad student in England at Sheffield Hallam University (sports engineering).

“The happiest time of my life as a person and as an athlete was my time at West Virginia, and it was probably the easiest time of my life,” he said. “I didn’t have to convince myself that there was something more in life than sports because the daily routine was a reminder of that. I couldn’t stay more than four hours in the shooting range because I had to go to class, I had to go to the library. I was crazy busy.”

But when Campriani became a professional shooter in 2013, his life became tedious. Camped out in a shooting range for eight hours a day preparing for the 2016 Games, he felt almost soulless. His obedience to shooting, Campriani said, exhausted him mentally. He had nothing else to look forward to during his day.

“You are taught ‘more is better,’” Campriani said. “It was completely unhealthy for me. I was just an unhappy person. I was at a shooting range, but I wanted to be somewhere else. I wasn’t developing as a person. I wondered what I was missing out in the world.”

Campriani said he won two golds in Rio only with enormous “mental damage control” – and not because of sheer skill. He retired following the Rio Games and said it took two to three years to finally feel comfortable out of his “bubble.”

At weddings and parties, Campriani skipped right over the part of winning three gold medals in the Olympics, afraid of being forever moored to sport. “It was a massive issue,” he said. “At some point you feel like ‘I don't belong to this world.’ The temptation was there to stay in sport, and it was driven by fear. I was scared I didn’t belong out there and I wouldn’t be as good as I was in the shooting range.”

“Athletes are going to go through this struggle, and they need a better sense of awareness that this is going to happen,” Campriani said. “If you help the athletes with the transition, they become a real value to society. It is not a ‘nice to have.’ It is the ultimate goal of a national federation – the return on investment.”

‘I Was Invested In Other Things’

Etzel won his gold medal in shooting at the 1984 Olympics in Los Angeles. He was 31 years old, but there was no identity abyss to hurdle in the return to his life in Morgantown, West Virginia.

“My transition was fairly smooth because I was in graduate school. I was coaching the university rifle team, which I had done for a while,” Etzel said. “I was in a relationship that was going well at the time, so I had a lot of social support.

“I think that’s a big factor that makes the transition easier, or different, than for other people. I was invested in other things.”

It is not as if Etzel didn’t face challenges. He remembers the week after getting back from the Olympics and being flown to the capitol in Charleston, West Virginia, in a private plane for a parade. During the festivities, he sat next to the gymnast Mary Lou Retton of Fairmont, West Virginia, the star of the Games with a gold medal in the prestigious all-around individual competition.

The ceremony ended at a car dealership, and the mayor said, “We have one more gift for you.”

He meant Retton, not Etzel.

She was given a red corvette. Etzel stayed seated.

“It was rather humiliating,” he said. “I didn’t expect anything, but it was an eye-opener.”

Part of the Olympic athlete identity foreclosure is how others perceive what you’ve done in spite of what it meant to you. Rifle was not as popular as gymnastics, and Etzel was regarded as unglamorous.

Later that fall, a member of the West Virginia University athletic department recognized Etzel’s Olympic achievement and put together a ceremony during a football game. Etzel was given a new Ford Bronco truck.

Etzel keeps the gold medal in its proper place. He hung it on his refrigerator for years. His friends tried to enshrine it (and him) by painting on his outhouse, “Ed Etzel’s Olympic Museum.”

He stepped off that podium in Los Angeles and never really stepped back on it. It was part of him, not all of him, and he was happy to share the experience. “Hundreds of people in the state have worn that medal around their necks and had their pictures taken with it,” he said.

Etzel coached the WVU rifle team for 13 years. He built it into a national powerhouse with four NCAA titles and a 101-5 record. The credibility that came with the gold medal helped with recruiting, but, more importantly, nearly all his athletes who were All-Americans were also A students who discovered the same balanced identity as their coach.

‘The Death of a Dream’

In 1982, Neyer was the world’s best diver. She won the world championships, helped lead the University of Florida to an NCAA Swimming & Diving national championship, and already had made the 1980 U.S. Olympic Team as an 18-year-old.

Ranked No. 1 in the world, she missed on a dive in the uber-competitive U.S. Olympic Trials, failing to make the team for Los Angeles.

“It was devastating,” Neyer said. “You talk about having the world ripped out from around you.”

It took 13 months for Neyer to reconcile what happened. She didn’t go near a pool, much less dive. It was her “reflection period.”

Neyer refers to research by the University of Virginia’s Doug Newburg, which maps an athlete’s cyclical process that starts with Dream, then moves to Preparation, then Setbacks/Obstacles/Success and then Revisit The Dream.

“If you don’t go through that reflection period, you get stuck between preparation and obstacles, or successes,” she said. “The reflection period gets you reconnected to what really matters. And if you’re not reconnected on what I would call a ‘soul level,’ then there’s just an emptiness.”

The period of reflection reconnected Neyer to diving. She rejoined the Florida team for her final year of eligibility and won both boards to claim two more NCAA titles. Thirty-six years later, she remains the only diver to win eight NCAA championships, two in each year.

Her dissertation in 1994 was about identity development and What Is Next for athletes. In her own life, “next” meant becoming a successful sports psychologist in Atlanta and counseling many former athletes.

“I've seen everything in athletes, from walking away and never showing up again, to having no sense of identity around sport and actively eliminating that identity from their lives,” Neyer said. “For some, it’s almost like it never happened.”

Grief can stand in the way of identity development for athletes who did not accomplish all that they dreamed of, Neyer said.

“I think one of the things that society does not embrace or acknowledge or deal with is grief. We don't really acknowledge death, and this is the death of a dream,” she said. “The process is not really all that different from the death of a loved one, because this was your heart and soul.”

In 2020, Neyer wrote an open letter via Facebook to the U.S. Olympic team after the 2020 Olympics were postponed, ruining the dreams of some athletes:

You may think that making that team or winning that medal would “make your life.” I promise you, it won’t. It is one life experience, and you write the story about it based on what you make of it. You’ll reconnect with your dream, or you’ll set your sites on new ones, and proceed from there.

It was Neyer’s way of telling aspiring Olympians that their lives and identities and lives are not foreclosed on. That they are more than athletes. That there’s more out there. 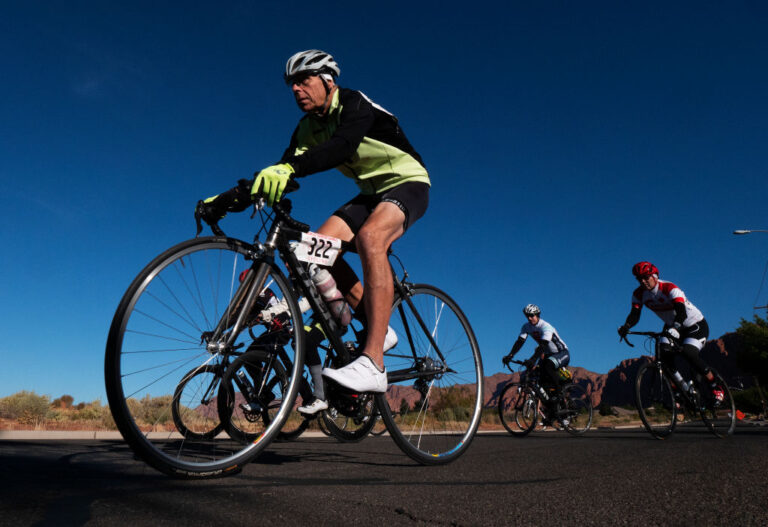 Senior Athletes Are Doing the Unprecedented, And They Are Ready For More