This year, John Zemaitis became the first man to complete the 25.1-mile swim across Monterey Bay, California using “English Channel” rules, which requires swimmers to complete the swim without a wetsuit and without assistance. Zemaitis completed the swim, through the 56-degree waters, in 17 hours.

He is not the first person to complete the swim.

Four female swimmers have completed the treacherous swim across the bay. Cindy Cleveland was the first to cross in 1980. California native Patti Bauernfeind made the fastest solo crossing, 13 hours, in 2014.

So why have women been more successful finishing this particular swim than men? 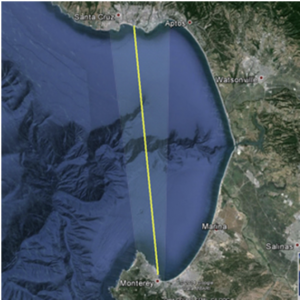 Physiology and psychology might have something to do with it. Another extremely taxing endurance event helps shed light on this.

By all accounts, the 2018 Boston Marathon was exceptionally challenging. Temperatures hovered in the mid 40s, rain poured throughout the race and the wind gusted at 25 miles per hour.

Across almost all of the age groups, more women than men finished. Overall, 96.4% of women that started crossed the finish line; for men the number was 95.4%. The dropout rate was up from the 2017 race. For men it was up almost 80%, and for women it was up 12%.

There is no single answer to explain the disparity, but some physical differences give women a slight advantage in colder conditions such as the 2018 Boston Marathon and Monterey Bay solo swim.

One of the biggest advantages female athletes have, especially in the cold conditions, is higher levels of body fat. Even among the world’s elite marathon runners, women generally have about 10%-15% body fat while men have about 5%-11% percent body fat.

Studies have found women tend to have higher body fat levels because of the hormone estrogen and childbearing physiology.

One of the biggest benefits of having a higher body fat level is it helps the body regulate temperature. Women tend to have more subcutaneous fat than men, which serves as a layer of insulation directly under the skin.

“We have a joke around here that the person who’s best suited for cold is fit and fat,” Catherine O’Brien, a research physiologist with the U.S. Army Research Institute of Environmental Medicine, told Popular Science.

Body fat also serves as an added energy source that runners can tap into once they’ve used all of their glycogen in the late stages of a race.

Physical characteristics are not the only things that help women conquer taxing events. They also tend to have a different mental approach than men. Women don’t give up easily, maybe stemming from childbirth, although that cannot be confirmed. What does happen is while men tend to have a lone wolf mentality, women band together and motivate each other to push through the pain.

“There’s a biological and social tendency for women to tend toward caregiving,” Adam Grant, the psychologist and host of the TED podcast WorkLife, told the New York Times. “So what I would expect to happen is, when the going gets tough, the men either quit or they double down and say, ‘I’m just going to push through,’ whereas women are more likely to reach out to runners next to them and offer support and seek support. Sharing pain and being part of a group can make it easier to withstand pain.”

This may provide an explanation for success at the Boston Marathon, but not the Monterey Bay solo swim, which is required to be completed without any help.

Additionally, a study published in the Journal of Medicine and Science in Sports and Exercise found women tend to pace themselves better throughout an event like a marathon.

“Men tend to start races more aggressively and take a higher risk approach, so they’re more likely to blow up in the second half,” Alex Hutchinson, the author of “Endure,” told the New York Times. “If you hit the wall at 18 miles in that terrible rainstorm and you’re wearing seven pounds of sopping wet clothing, there’s a heightened risk you’re going to drop out.”

Study findings support this claim: Men are more likely to have a slower second-half split than female racers. Researchers found races are more evenly paced among elite runners, but a disparity exists.

In colder, less than ideal conditions, women may have a physiological and psychological advantage over their male counterparts.