Diabetes is a common disease in society, and athletes are not immune. Scott Crabtree, a senior baseball player at the University of New Orleans, is one of those athletes.

“It definitely challenges you,” Crabtree said. “I’ll have days where I’ll be in the workout room. We’ll be lifting weights, and my blood sugar crashes. People don't understand all the time that I have to sit down for a few minutes and eat a snack or drink some Gatorade and relax for about 5-10 minutes, let that blood sugar start to rise back up before I can get back into it.”

While not all people understand, his teammates do.

“It's insane, honestly,” said Crabtree's teammate Zach Thompson. “My body hurts all the time because we do so much. We're out here all day every day and with his diabetes and he's sweating and having to constantly put insulin in and constantly have a certain snack because it goes up and down so much from being out in the sun and running all day. It's just crazy that he can do it."

More than 100 million people are living with diabetes in the United States. An estimated 415 million people worldwide are afflicted — 1 in 11 of the world’s adult population. Of that total, 46 percent are undiagnosed.

The story of Crabtree’s journey with diabetes has resonated well beyond his close circle. He is a global ambassador for Juvenile Diabetes Research Foundation and mentors kids with diabetes. He uses his story to show them how to manage the disease and live an active life.

“To have something like that," UNO baseball coach Blake Dean said, "that he can share with other people and overcome, it sets him up for the rest of his life because he knows how to deal with adversity.”

Athletes around the world are forced to deal with this disease in their daily life as well as their career in athletics.

There are two major types of the disease. In Type 1 diabetes, the body stops producing insulin, a hormone that enables the body to use glucose found in foods for energy. People with Type 1 diabetes must take daily insulin injections to survive. This form of diabetes usually develops in children or young adults, but can occur at any age.

Type 2 diabetes results when the body doesn’t produce enough insulin or is unable to use insulin properly. This form of diabetes usually occurs in people who are over 40, overweight and have a family history of diabetes, although today it is increasingly occurring in younger people, particularly adolescents.

“In our profession, you’re supposed to be tough… I thought it was something I would just bounce back from,” former NFL quarterback Jay Cutler said as he explained the process many people go through when first diagnosed with diabetes, especially those expected to be “tough” and healthy for work like professional athletes.

Today, Cutler is comfortable discussing the emotional side of diabetes as well as the physical challenges.

“Sometimes, I take pride in it; sometimes, I feel bad for myself. There’s a whole range of emotions you go through.”

Cutler revealed the challenges of being a diabetic pro athlete in a series of videos.

Hypoglycemia is one of the symptoms most often related to diabetes. This condition is caused from having a blood sugar level too low to keep a body energized. Being aware of the signs and symptoms of hypoglycemia and being prepared is important. Sometimes it’s easy to think extreme sweat or light-headedness is a result of playing hard. However, this could be a sign of low blood sugar. Other symptoms of hypoglycemia are weakness/fatigue, shaking, headache, irritability, confusion, dizziness, hunger and impaired vision.

Some tips and strategies to help diabetics control blood sugar levels and perform at peak levels:

Today, medicine and health researchers are making advancements in treatment, management and prevention for diabetes. Apps such as Fooducate and Glooko help people log their sugar and food intake. Newer advances in blood sugar devices allow people to test their levels and get results within minutes. More people and athletes are using smart pumps such as the Continuous Glucose monitoring (CGM) device that sticks to the skin and monitors blood glucose throughout the day. Some devices can be set to auto mode to control insulin levels.

“The FDA is dedicated to making technologies available that can improve the quality of life for those with chronic diseases – especially those that require day-to-day maintenance and ongoing attention,” said Jeffrey Shuren, director of the FDA’s Center for Devices and Radiological Health, in an announcement from the FDA. “This first-of-its-kind technology can provide people with Type 1 diabetes greater freedom to live their lives without having to consistently and manually monitor baseline glucose levels and administer insulin.”

While more people are diagnosed with diabetes each year, advances in technology and medicine help find more ways for people to seek medical help and control of the disease.

Other athletes and sports figures with diabetes

Dustin Paré is a journalism student at Arizona State University 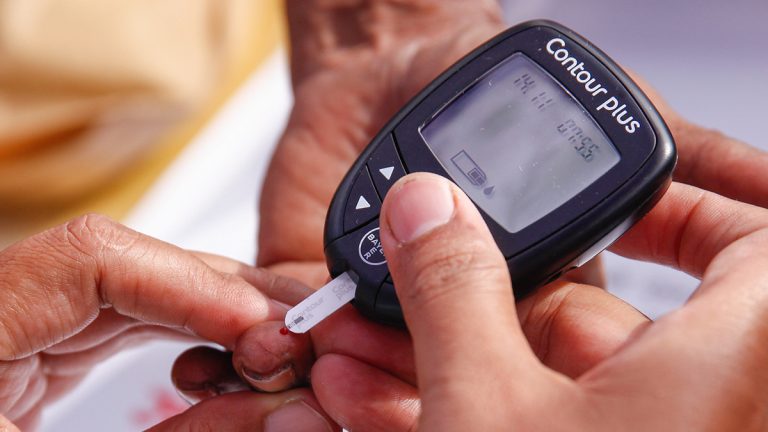