Only 10% of sports editors and 11.5% of sports reporters are women. It’s time to get ahead of, call out, and dismantle environments of harassment and prejudice to keep women sports journalists in the profession.

Through much of my youth, my Italian-born mother thought my emotional and physical growth should be fueled by two things: lasagne alla bolognese…and Barbies.

The pasta dish remains a favorite, but from Day One, Malibu Skipper morphed into Dick Butkus, thanks to a thick coat of eye black I would apply. She would come at Ken like a freight train, wrap him and throw him to the ground. A successful tackle would end my interest. Skipper would soon land in the closet’s corner and I would be outside playing wiffle ball with the Shoemaker boys.

They never made me feel like an outcast. So why, when I began navigating the world of sports journalism – the only career path that ever interested me – did others? And why, decades later in 2021, are the horrific stories of sports figures in power harassing female journalists still a thing?

Have you been listening? News reports have shared accusations of sexual harassment against Mets General Manager Jared Porter, who was subsequently fired, and Los Angeles Angels pitching coach Mickey Callaway, whom the team is investigating.

Meanwhile, Lisa Cornwell, a former anchor and reporter for Golf Channel, filed a complaint with the Equal Employment Opportunity Commission, alleging among other things, that she had been unfairly berated by male bosses.

And these are stories that broke in the last seven weeks.

How could it be that it was 43 years ago when Sports Illustrated reporter Melissa Ludtke and Time Inc., sued Major League Baseball for denying her access to the clubhouses at Yankee Stadium? All she wanted was to be afforded the same opportunities as her male colleagues.

And yet here we are.

One of the many disturbing trends to come out of the 2018 Associated Press Sports Editors Racial and Gender Report Card, issued by the University of Central Florida’s Institute for Diversity and Ethics in Sport, is that women still represent a small percentage of sports journalists, especially when it comes to positions of power.

Only 10% of sports editors and 11.5% of sports reporters are women. It’s troubling when you think about how many females are interested in sports journalism. At my employer, the Walter Cronkite School of Journalism and Mass Communication at Arizona State University, more than twice that – 25.1% – of our sports journalism majors are female.

Lessons can be learned from this. One of the biggest is a troubling mass exodus of women in all facets of journalism. Females comprise about two-thirds of graduates with degrees in journalism or mass communications – at Cronkite, the current enrollment of women is 76% – yet the media industry is just one-third women.

What do we take from this? The industry is not kind to women as a whole. Some of it is surely the lack of female leadership (and strong female role models). The other is the ugly truth that women remain second-class citizens in the workforce, earning 82 cents for every $1 earned by men of all races, according to the 2019 U.S. Census.

It’s shameful that sports journalism remains a treacherous path for women. For many of us, it was a career goal we chose in our youth.

My desire was fueled by the moments my father and I spent at Chicago White Sox games. He never graduated high school but enlisted in the Army, where he stayed for 25 years before finding a 9-to-5 job in downtown Chicago. He was a kind hard-working man but also exhausted and quiet by the time he returned home every day.

At White Sox games it was a different story. He was upbeat, excited and always held hope that this was the year. Sadly, it never was. During the first 22 years of my existence, they didn’t play a postseason game. And in 2005, when they won their first World Series since 1917, he was already gone.

But it was the promise that bonded us, the shared experience in believing the best team in baseball could be the one we loved, the blue collar Southside crew that lived in the shadow of a Cubs organization just 10 miles to the north but thousands more if measured by socioeconomic perception. Gosh, I loved watching my father at those games. And I knew I wanted a job that would allow me to work in an environment of fresh-cut grass, irrational passions and heart-stopping moments.

After a positive experience at the University of Illinois’ student newspaper, where my male peers treated me as an equal, helped me grow, promoted me and supported me when I was the first female in the Illinois football locker room (so did the head coach, Mike White, by the way), I thought the transition to a professional career would be smooth.

Good one. My journey was far less perilous than the road taken by many others, but it had its moments. I’ll never forget my first experience in a baseball clubhouse, when a St. Louis Cardinals player in the visitors’ locker room at Dodgers Stadium threw a jockstrap at me and it landed, and stayed, on my shoulder. Meanwhile, his teammate got in my face and accused me of looking for male genitalia.

Other experiences, too, almost drove me to leave the profession. The professional baseball player who used my name every time his wife asked him who the female was that was calling him (they were his girlfriends). “You’ve got to cover for me,” he would say. “I’ll give you better quotes.”

The baseball coach who turned my innocent phrases into sexual innuendos. (I never heard the end of it after I said “going deep” while watching batting practice.) The male colleague who was baffled that I was going to cover a college football training camp a month after giving birth. (“What are you going to do, breastfeed on the sidelines? Ew.”)

My biggest regret is that I never said anything. Not to the coach. Not to the player. Not to the colleague. I just wasn’t brave enough. It is part of my personality to not rock the boat, but also, I never seriously considered it. Who, I thought, would side with me?

Why didn’t I quit? Mostly because 98% of my experiences were good. But also because often I was surrounded by men who had my back. My peers at the student newspaper. My sports editor at the Camarillo Daily News who angrily fired off a letter to the Cardinals. (They never responded.) The male journalist who witnessed the Dodger Stadium clubhouse incident, rushed to my defense and gave an earful to somebody with the team. Even the great former Dodgers pitcher Orel Hershiser, who pulled me aside one day in the L.A. clubhouse because he noticed that when I walked into the team’s space, my shoulders were hunched and I looked down at my feet, begging not to be noticed. (It’s the same reason I never wore perfume during my entire career.)

“Next time you walk in here,” he said, “I want you to stand straight, look forward and act like you belong. Because you do.”

Amazing how much those words lifted me. And when I wrote earlier that “we don’t care enough” it’s because there needs to be more intervention from others to make sure women enter the world of sports journalism and stay there.

It starts with executives of professional sports teams and leagues. They need to vet their hires better. Seriously. After some of the stories reported recently about sexual harassment came to light, comments about “worst kept secret in the league” followed.

How did people in charge not know about their backgrounds? Additionally, league and club executives need to set the tone early. Spell it out. Sexism will not be tolerated. Harassment won’t be tolerated. Female journalists need to be treated with respect. The messaging is…not…that…hard.

Men in the business need to do better, too. After news breaks about the harassment of a female journalist, many of their male peers jump on social media and say, “I worked with a lot of women and they deserve to be here.”

Great. Thanks. But that’s not enough. Get in front of it. If you see something wrong, speak out. Tell management. Stand up in the moment. Just don’t be guilty of one of journalism’s greatest sins: being late to the story.

Newsroom leaders need to start the dialogue of support early. And send a no tolerance message from Day One.

We need women to stay in the field. Sports journalism is better with diversity.

Who better to understand the experiences of an underserved community, to share the widest possible range of stories? White men shouldn’t be the only ones controlling the conversation.

Society doesn’t care enough about the treatment of female sports journalists. It’s time to change that. 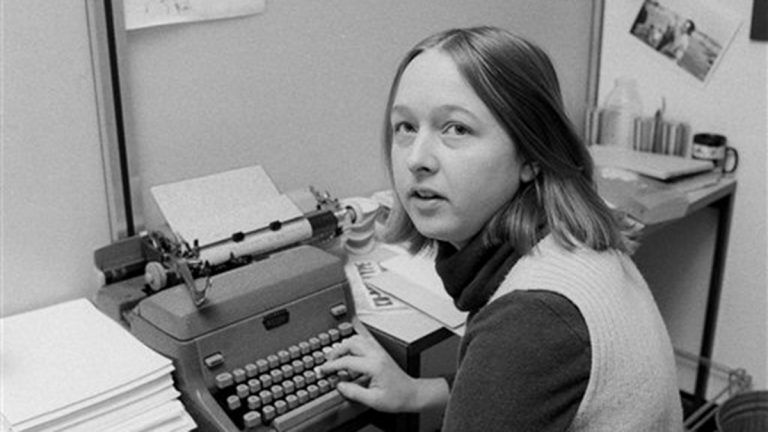 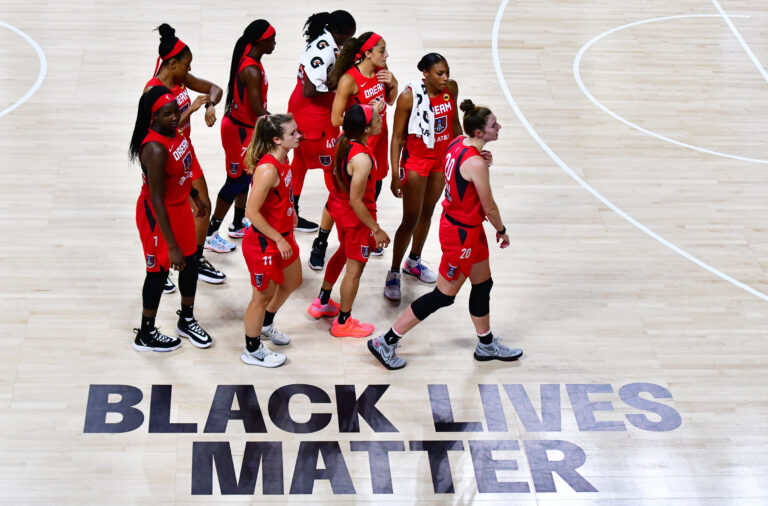 16 Women Making a Difference in Sport 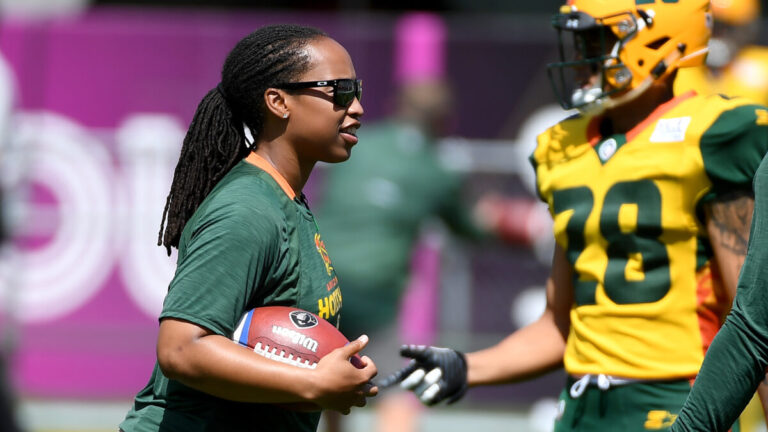 Will Women Breaking Barriers in the NFL Drive Progress Forward?