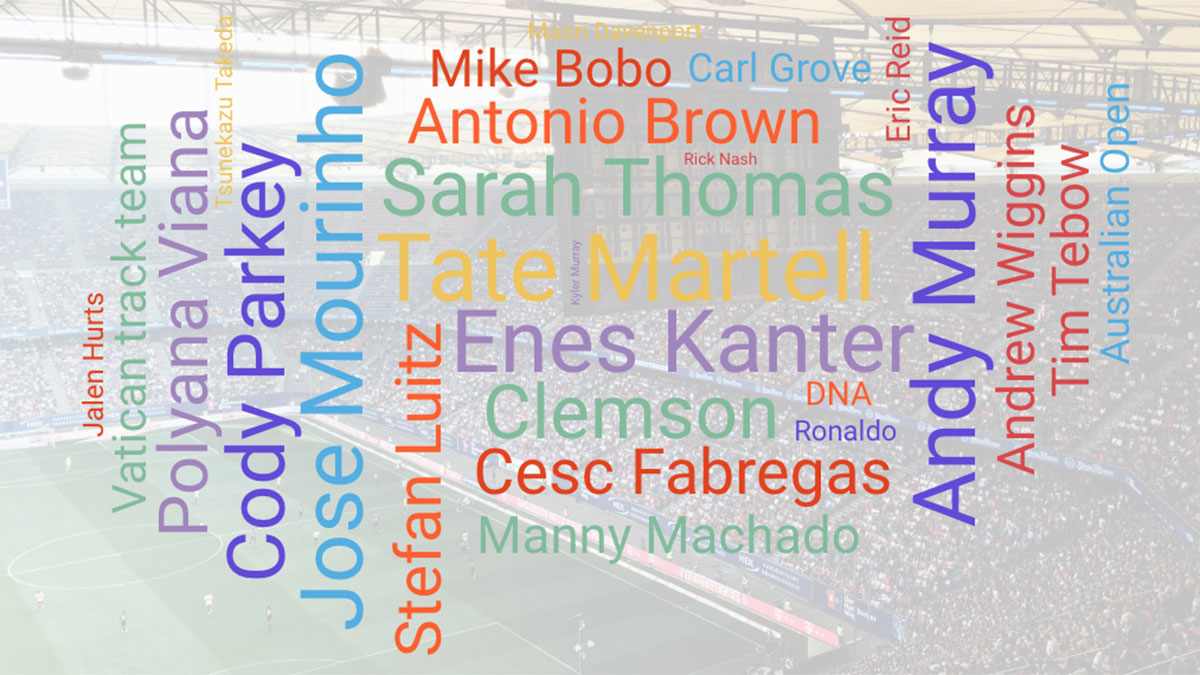 Authorities have issued a warrant to obtain soccer star Cristiano Ronaldo's DNA in relation to sexual assault allegations against him. Police reopened a near decade-old lawsuit this past Fall that alleged Ronaldo took advantage of a woman in 2009 at a Las Vegas resort. The warrant will be served in Italy, where Ronaldo plays for the Turin-based club, Juventus, and will be used to find out if it matches DNA recently found on the alleged victim's dress.

The Vatican launches a track team made up of Swiss Guards, nuns and even a 62-year-old professor

About 60 Holy See runners — Swiss Guards, priests, nuns, pharmacists and even a 62-year-old professor who works in the Vatican’s Apostolic Library — are the first accredited members of Vatican Athletics. It’s the latest iteration of the Holy See’s long-standing promotion of sport as an instrument of dialogue, peace and solidarity.

This situation actually began with a frightening injury to Oklahoma City Thunder big man Nerlens Noel, who was carried off the court in a stretcher following a hard fall onto the hardwood in his team's 119-117 loss to the Minnesota Timberwolves on Tuesday night. Later in the game, Thunder guard Dennis Schroder became irritated with Minnesota players he believed were making light of the injury and laughing about it on the court. Postgame, Timberwolves forward Andrew Wiggins responded by calling Schroder something that sounded a lot like "gay," adding Schroder was "acting crazy for no reason." As media reports moved around the internet quoting Wiggins' use of the derogatory term, he took to Twitter to set the record straight, claiming the word he actually said was "getting," but media outlets including ESPN, the AP and the NBA's own website stuck to their guns, putting them at odds with the player's version of events and causing many other writers to question the apparent stubbornness of the reporting.

'I knew how to defend myself,' says UFC star Polyana Viana after subduing wannabe thief

Obviously this criminal had no idea who he was targeting. UFC star Polyana Viana was a target of a robbery earlier this week, her profession unknown to the thief. Viana stressed calmness over panic, having a plan just as she would for any other fight.

NBA legend Shaquille O’Neal has offered to help cover the funeral costs of Jazmine Harris, the young girl who was killed in an apparent drive-by shooting Dec. 30, 2018, as her family was driving in Houston. O’Neal is teaming up with Houston police officer Kenneth Miles to help cover the funeral cost for the 7-year-old girl; one suspect, Eric Black Jr., is currently in custody and could be facing a capital murder charge for Jazmine’s death. Houston Texans wide receiver DeAndre Hopkins pledged his playoff game check to Jazmine's family.

Coffee rules the morning for millions of people around the world and now runs the NBA and its most traveled team, the Portland Trailblazers. This is a story about how coffee became integral to the daily routine of the basketball franchise as they embark on their travels, nearly 545,000 miles since 2009 and close to 40,000 miles more than the next closest NBA team!

This cyclist tested positive for a steroid. He's 90

90-year-old cyclist Carl Grove tested positive for steroid abuse after setting a world record in his age division for completing six laps in just 3:06.12. Post-race Grove was tested for steroid use where they found small levels of trenbolone. He was stripped of his title until it was determined that these traces of steroids likely came from the consumption of contaminated meat. The United States Anti-Doping Agency has seen many cases of positive test results due to environmental contamination and are attempting to establish minimums for substances that may come up on a test.

The Arizona Interscholastic Association fired a basketball referee who reportedly made a racist remark prior to a freshman game. A Facebook post by the mother of one of the players went viral, after she praised the way the young boys responded by playing "with class." The school is nearly 90 percent Hispanic.

Colorado State’s football team had its worst season under head coach Mike Bobo’s four-year tenure in 2018 (worst season since 2011), finishing at 3-9. A three-win season in college football typically will not result in the head coach receiving a $100,000 raise. However, written in Bobo’s contract, he is to receive $100,000 raise every year of his contract through 2022. He declined the raise and said, “I’m the head football coach, and I believe accountability is a two-way street.”