According to the NCAA, more than 17,000 of the 490,000 athletes competing among all three divisions come from outside the United States.

Many international student-athletes choose to come to the U.S. for a variety of reasons, including learning new skills, getting an education while competing or just the new experience.

At a recent panel discussion in Las Vegas, athletes from universities across the U.S. spoke about their decision to study in the U.S., the unique challenges they faced and provide advice for future athletes.

“I always knew about the opportunity to come study in the U.S.,” said Blaha. “I never really considered it until the moment where I realized I wanted to further my education which is when I started thinking of coming to the U.S.”

After accomplishing his goal to make it to the 2008 Olympic Games representing Austria, Blaha said he realized that it was difficult to pursue an academic career alongside a professional athletic career.

[beauty_quote quote='“I always knew about the opportunity to come study in the U.S. I never really considered it until the moment where I realized I wanted to further my education which is when I started thinking of coming to the U.S.” - Constantin Blaha']

“In Austria the term (student-athlete) wouldn’t exist because either you are a student or athlete or you try to be both but you’ll have to figure out a way to make it happen,” said Blaha. “It’s not easy.  Professors don’t really respect your athletic schedule, they don’t care or try to work with you.”

Stella Savvidou, a current UCLA gymnast from Melbourne, Australia said she had no knowledge about the student experience you could get in the States.

“I went to the 2015 World Championship games in California and the UCLA coach actually goes to these to look for future prospects for the team,” said Savvidou. “She came up to me and just started talking to me and introduced me to the idea of coming to the States.”

Savvidou said after that initial meeting and later conversations with the UCLA coach, she decided to fly out and have her official visit and immediately fell in love with the campus.

“It was very quick. I came a quarter later, came straight to season. I was thrown into the deep end but it was amazing,” said Savvidou.

Lazar Pasuljevic, a former USC men’s water polo player (2014-2016) from Herceg Novi, Montenegro, said he had known about USC and American university programs since he was about 12 years old. 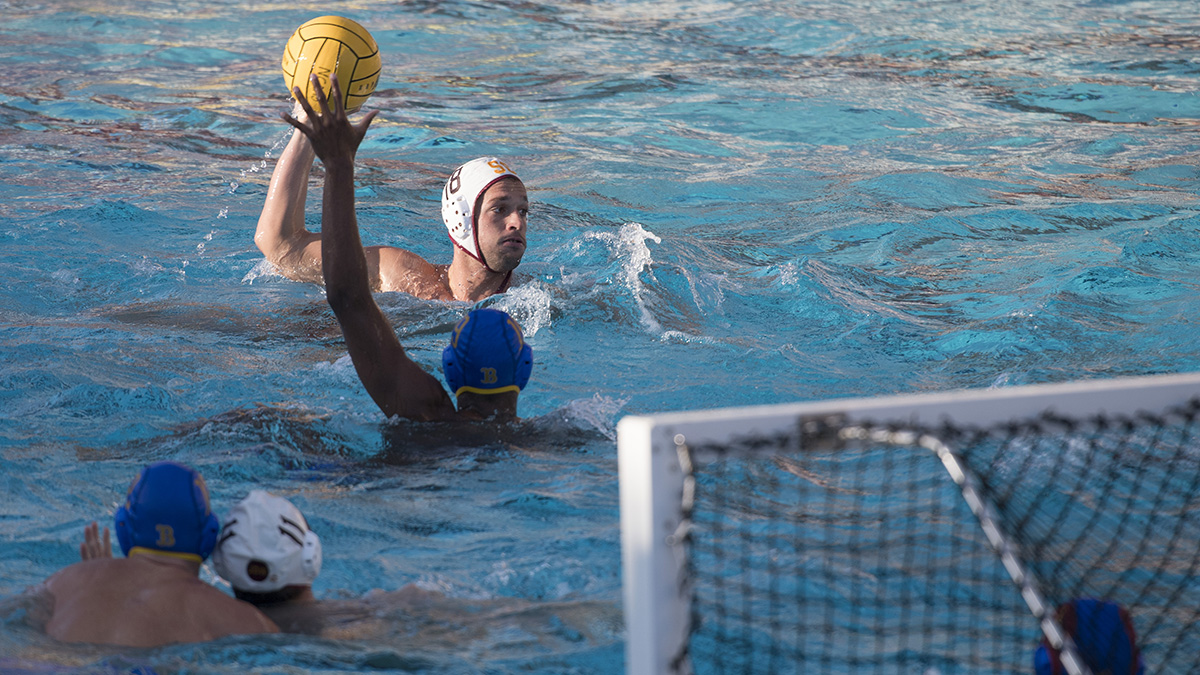 Lazar Pasuljevic (18) of USC looks to pass the ball during the Division I Men's Water Polo Championship in 2017. (Photo by Justin Tafoya/NCAA Photos via Getty Images)

“I found out about USC through my coach who comes from the same hometown as me,” said Pasuljevic. “I had a chance to talk to him when I was young because they take USC men’s water polo team to Montenegro, Italy, France and other European countries on a tour every four years in order to experience something new.”

Pasuljevic said the connection he made at an early age made it easier for him to actually decide to apply for schools even before deciding to come to USC.

“It was a long process for me,” said Pasuljevic. “Applying to schools, trying to get the best offer, get into the best possible school and education and also sports program.”

Gerhard de Beer,  an Arizona offensive lineman (2013-2017) from South Africa, said he was first approached by American universities after medaling in international track and field competitions. He turned them down because he wanted to try out the South African system first.

“I thought America would be a better opportunity for me to further my career in sports and athletics and also get a degree,” de Beer said. “So, I got recruited for track and field.”

[beauty_quote quote='“I started asking schools if I could play football for them. I never realized how arrogant my statement was that I had never played football before in my life.” - Gerhard de Beer']

De Beer said after seeing a bird's eye view of UA’s football stadium he asked what they did there and immediately wanted to play but was told no.

“So, I started asking schools if I could play football for them,” de Beer said. “I never realized how arrogant my statement was that I had never played football before in my life.”

The transition from one’s home country to the U.S. can be an overwhelming experience for international student-athletes because it means learning the American education system, dealing with language barriers and adapting to the new culture.

When the day came for Blaha to take his first exam at ASU he said he had a hard time understanding what it meant to “print your name” and “bubble in answers on a scantron.”

“All I had was a pen and I’m like 'How the hell am I going to print my name on this piece of paper?',” said Blaha. “I had to wait and kind of look at what everyone was doing, but I got the hang of it. It was a real small roadblock but it’s one of those things that you are not used to, the customs of how things work here but those are pretty easy to overcome.”

Savvidou had a similar experience when it came to writing her first college paper.

“It says I have to write four pages, so I wrote four pages single spaced like you normally would,” said Savvidou. “My friend says no it has to be double spaced, but I had never heard of it. So, I emailed my dad who is actually a professor but he had no knowledge of it. I was left to my own device so I write four pages and then between every single word I would click the space button twice.”

Savvidou said she ended up writing double the amount she was supposed to and received a zero because it was not the right format.

“To this day I look back and I actually did that, but it was one of the most embarrassing but funniest things that happened to me,” said Savvidou.

For Pasuljevic the challenge was not knowing how to speak English.

“I knew how to write, I took some English courses in high school and middle school but never had the chance to speak English before so I found it difficult to get used to what people want me to do or what my coaches want me to do,” said Pasuljevic.

Pasuljevic said an exam or paper that would normally take an hour to complete took him the whole day.

Through team bonding and the team setting Pasuljevic was able to build a connection that helped him play water polo throughout the time he was at USC.

“That’s just how my coach built that culture, it’s important to interact with each other,” said Pasuljevic. “We’re all working together toward a common goal or when we lose we lose together and we try and improve together, it’s all about the team.”

De Beer’s challenges was having a better understanding of the American culture and also women.

“Something acceptable back at home might be considered rude here and vice versa," de Beer said. “I had the best advice someone once told me, 'You’ll never understand women' and they were right but my girlfriend back at home still hates me half the time anyways.”

Reflecting back on their collegiate experiences one thing all four athletes had in common was the advice they would give to future athletes and recruiters.

“I always feel like I should do my part in educating people about the system and the opportunities here (U.S.),” said Blaha. “Because I went through it and I’ve heard it first hand from other people which is why I made my decision even without taking a recruiting trip, I trusted them.”

Savvidou said the biggest advice she would give to an international student-athlete looking at universities is to watch YouTube competitions and interviews the coaches and gymnasts give.

“That gave me a small snippet of what it would be like,” said Savvidou. “Then after that course talking to my friends who are on the team, to get a better insight to know what my day would be from 6 a.m. until 10 p.m.”

Pasuljevic said recruiters should spend more time reaching out to international athletes and telling them about the experiences of being in the U.S.

“It is definitely a hard decision for some people to decide to move on and come here,” said Pasuljevic. “It’s a big fear of what’s going to happen, how it’s going to be, am I going to adopt to the culture and people.”

One thing de Beer wished he had gotten was to be showered with resources and information.

“Especially for somebody who knows nothing about the system like me, I would have loved to know more about it and what is a Power Five Conference,” de Beer said. “My decision would have been a lot clearer and easier. The other thing is don’t be afraid to use your current international student athletes as a resource. Have them share their honest experience because it’s easier to use somebody who is currently in the system to relate to.”

Based on interviews conducted by Luke Brenneman, manager events and communications at Global Sport Institute