Thanks to the biggest change to NCAA amateurism rules in decades, college athletes are now profiting from the use of their names, images, and likenesses. However, restrictions and ambiguities in U.S. immigration law have made it difficult for international athletes to benefit from their NILs without risking deportation.

Ula Motuga isn’t afraid to take a calculated risk. As a high school senior, the native Australian knew that she wanted to play college basketball in the United States after a single visit to the University of Northern Colorado. But when Bears head coach Kamie Ethridge and assistant coach Lauren Cohen abruptly moved to Washington State University, Motuga had a decision to make: stick with a school she had actually seen, or follow Ethridge and Cohen to one that she hadn’t.

“I knew that it would be easy to have a good and steady relationship with them and someone that I could trust,” Motuga said. “So I committed before coming out to WSU.”

Today, Motuga is a senior forward for the Cougars, a three-year starter who now considers Pullman, Washington, a second home. Yet despite her decision paying off, there’s a related gamble that she isn’t willing to make: profiting from the use of her name, image, and likeness (NIL), the way other college athletes have been since the National Collegiate Athletic Association lifted a longstanding prohibition last summer.

Under federal immigration law, most international students are allowed to work in the United States in only limited circumstances. Currently, it’s both unclear and unlikely that many NIL activities – such as signing autographs or hosting sports camps – would be permissible.

Within the government, no one seems to know exactly how restrictions on international student labor apply to NIL. “We have not heard [the Department of] Homeland Security give any advice,” said Jon Velie, an immigration attorney and lead counsel of Velie Law Firm. “They’ve been very quiet.” Similarly, college athletic departments have been largely unable to provide detailed guidance to the more than 20,000 international athletes competing within the NCAA’s three divisions.

As many of their peers take advantage of the biggest change to college sports amateurism rules in decades, international athletes like Motuga face a conundrum: cash in, but risk jeopardizing their visa status or facing potential deportation.

“It kind of sounds like there’s not a whole lot that can be done,” said Mackenzie Morgan, a University of Maryland distance runner who is originally from Canada. “So [school compliance officers have] kind of just been saying, ‘You know, nothing’s really changed, and for the most part, you can’t work, you can’t profit off of it.’ So it’s risky, essentially.”

When the NCAA’s interim policy permitting college athletes to make money from the use of their NILs went into effect on July 1, a slew of deals followed. Jackson State University football player Antwan Owens endorsed a hair-care product. Fresno State University basketball players Haley and Hanna Cavinder traveled to Times Square in New York City to promote their partnership with a mobile phone company. At Brigham Young University, a sports nutrition company announced an agreement that will compensate all of the school’s football players and provide full tuition for walk-ons.

According to Opendorse, an online marketing platform for athletes, the average Division I athlete who made at least one deal during the first four months of the NIL era earned $686 before tax. In Divisions II and III, it was $68 and $35 per athlete. Chloe Mitchell, a volleyball player at Aquinas College who is believed to be the first college athlete to be compensated for their NIL, said the process of creating an online video endorsement for a mini-golf company was as simple as “I just filmed it, put it up, got paid.”

But the picture is far more complicated for international athletes. Some, like University of Illinois basketball player Kofi Cockburn, who is from Jamaica, have green cards that allow them to permanently live and work in the United States – and to make money from their NILs (though Cockburn was suspended for a separate infringement of NIL rules).

However, many more international athletes have F-1 visas, which authorize them to study in the U.S. full-time, pursuing an education at an accredited institution that culminates in a degree, certificate, or diploma. F-1 visa holders are permitted to engage in three types of paid work: on campus in a direct service provider role to other students; off campus for special cases of economic hardship; and at on- and off-campus jobs that are tied to their specific fields of study (essentially, paid internships).

All of these options involve restrictions and paperwork. For example, working off campus requires international students to first complete a full academic year in their program of study, as well as to receive approval from the Department of Homeland Security.

Velie, the immigration lawyer, believes that many NIL opportunities, such as appearing in television commercials, likely violate F-1 work rules. Other activities occupy a legal gray area. For instance, imagine a company paying Motuga to use her image on a T-shirt. Because Motuga isn’t doing anything, Velie said, her paychecks might qualify as passive income and be permissible.

“But [the international athlete] can’t go and autograph them,” Velie said. “The minute [they] have to take an action, I think you could get them in trouble.”

The possibility of trouble with federal authorities has been enough to discourage many international athletes from pursuing NIL deals. University of Nebraska football player Nouredin Nouili, who is from Germany, turned down NIL deals with a local car dealership and a personal grooming company out of fear of losing his F-1 visa. Washington State tennis player Savanna Ly-Nguyen, who also plays for Vietnam’s national team, said no to an endorsement offer from Asics this summer.

“It was difficult,” Ly-Nguyen said. “It was a great opportunity because they were willing to, you know, pay for some of my expenses to play tournaments and at the same time have equipment that I can use to play.”

In addition to forgoing immediate income, international athletes are missing out on the opportunity to begin building their long-term personal brands while still in college. “The benefits would be just growing your name and meeting different people and having different opportunities and different pathways of choosing what you want to do,” said Washington State golfer Amy Chu, a business and marketing major who is from Australia.

Under certain circumstances, college athletes with F-1 visas may be able to monetize their NILs and not run afoul of immigration law. But, again, the situation is complicated.

Take Motuga, the Washington State basketball player from Australia. According to Kameron Cox, director for the University of Illinois INFLUENCE program, international athletes like her may be able to legally cash in by arranging for endorsements in their home countries that are “home facing, or prepare activities that are focused on the American market but consummate those things back home.”

Cox also said international athletes could agree to post sponsored content with an American company. However, there’s a catch. “It seems that you can neither create nor post content in America,” he said. “It’s really, really difficult.”

Another possibility that Cox has confirmed with immigration attorneys: Suppose a Canadian football player wants to sign a NIL deal with a local restaurant in his U.S. college town. That athlete could reach out to the restaurant while in the U.S. and negotiate that any promotional activity will not take place until the athlete returns to Canada. Cox says that the ends of semesters are the best time for international athletes to take advantage of this because marketing windows tend to be short.

Velie, the immigration lawyer, said that schools and athletic departments could also help international athletes by structuring on-campus employment opportunities in ways that would “allow NIL, if the students are being paid in a company that’s located on the university property that provides services to students.” The same logic could apply to off-campus jobs tied to areas of study. “If you structure [NIL] in the regulations that currently exist,” Velie said, “a foreign student could get money while attending the university and not be in violation of their F-1 visa status.”

Initiatives like these aren’t guaranteed to work. International student work approval is a complex process that involves many people and stacks of paperwork. But similar to how state laws put pressure on the NCAA to change its NIL policies, Velie thinks that such efforts could put international athletes on the radar of federal lawmakers and the Department of Homeland Security.

“It’s an interesting thing,” he said, “and somebody’s going to have to make a chance shot on it.”

For now, Velie recommends that athletic departments make the effort to educate themselves when getting involved with international athletes and NIL. “Call immigration attorneys in, and look at the regulations,” he said. “Don’t just follow what another university does. Get real legal advice.”

In June, ESPN asked more than a dozen college coaches, athletic directors, compliance directors, and politicians about the legal ramifications of NIL for international athletes with F-1 visas. Several stated that they hadn’t previously considered the issue. Others said they believed that any decisions on the matter would need to be made by the federal government.

In the same ESPN article, multiple aides working for members of Congress who have been involved in potential college sports legislation addressing NIL and other issues such as athlete health and safety said that international student visas had not yet been a part of those conversations.

Simran Kaur Sethi, a former University of Oklahoma tennis player from India who is now a doctoral student working in the school’s compliance department, said that international athletes often feel like afterthoughts within the NCAA system – and not just when it comes to NIL. One example? Helping international athletes, not just domestic athletes, thrive after their college sports careers end.

“A lot of bigger institutions like FBS programs have career fairs for athletes specifically,” Simran said “But a lot of times, they’re missing employers that will file for [H1-B visas] that can afford to, you know, pay for an employee to get an H1-B stamp. It takes a month. It takes money. It takes a lawyer to come in and [an] immigration lawyer to do that.”

Ultimately, clarity on how athletes with F-1 visas can and can’t profit from their NILs won’t come from the NCAA or its member schools but rather from federal officials and lawmakers. While bills addressing pathways to citizenship for immigrants are currently circulating in Congress, none address international athletes and NIL.

“There is something flat out wrong with an industry that makes billions of dollars a year while many of its athletes can’t afford to put food on the table or buy a plane ticket for their parents to see them perform,” Murphy said. “At a minimum, all college athletes deserve the ability to use their own name, image, and likeness how they see fit, and that includes international athletes who shouldn’t need to worry about losing their visa status and ability to pursue higher education in this country to benefit as well.” 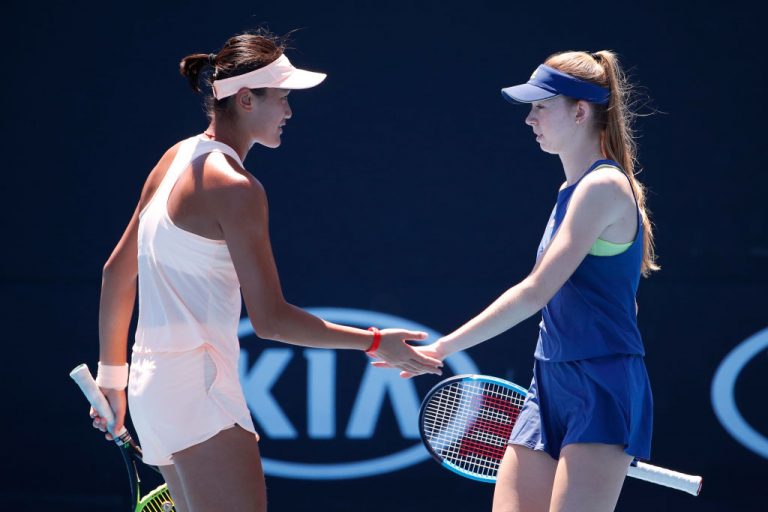