While standing on a football pitch in Lyon, France, and preparing to face the Netherlands in the FIFA Women’s World Cup final, the members of the USWNT were also fighting a conflict at home: the battle for equal pay.

The main argument against equal pay across the men’s and women’s national teams has been simple: women’s sports don’t produce as much revenue as men’s.

The value of a television advertisement slot or the amount of money generated aren’t the only factors indicative of popularity when it comes to measuring interest in a women’s sport. Another is how many people tune in.

The women of the United States and Netherlands drove a record-breaking day across FOX Sports’s broadcast, streaming, and social media platforms, with the audience peaking at 20 million viewers combined between the FOX broadcast and its streaming services.

The 2019 FIFA Women’s World Cup final matchup averaged an audience of nearly 15 million, and was named the “most-watched soccer match on English-language television in the United States,” according to FOX Sports.

FOX Sports provided slightly different headlines regarding viewership following the finals of both the men’s and women’s World Cups.

For the 2018 men’s World Cup final, FOX rounded up its peak viewership, according to Nielsen Media Research, from 14.6 million to 15 million, while the final match averaged 12 million viewers.

After the 2019 women’s World Cup final, FOX chose not only to use the average number of viewers instead of peak viewership, but also chose to provide a number that wasn’t rounded to the nearest million. 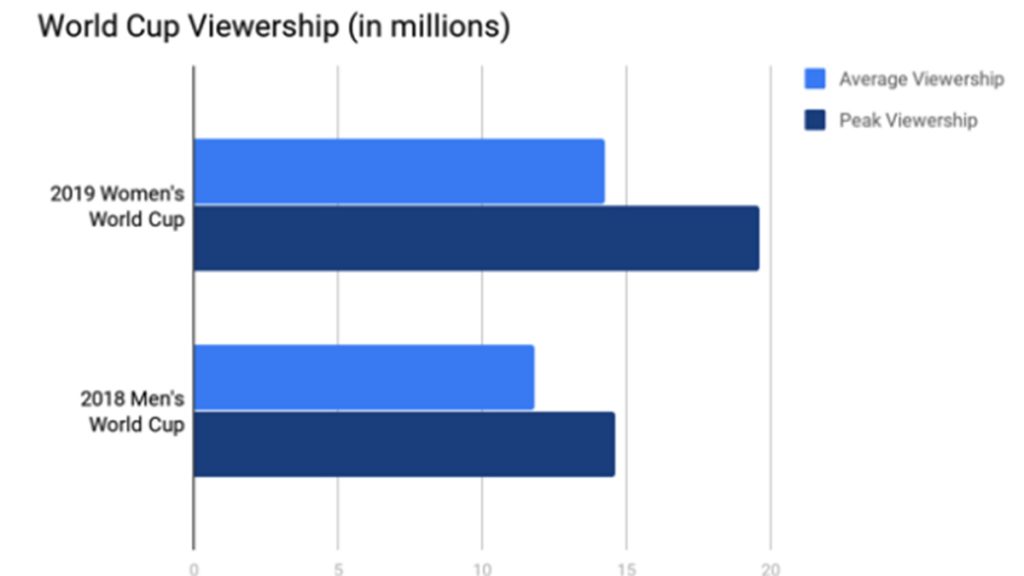 The women’s performance outdid the 2018 World Cup final by 22% while also sharing the stage with two other tournament finals in the world of soccer. The Women’s World Cup final was just the opening act for a stacked Sunday soccer lineup, followed by the Copa América final and the CONCACAF Gold Cup final.

USWNT forward Megan Rapinoe told reporters she thought this decision to host three tournament finals on the same day was “ridiculous and disappointing.” Both the governing body and soccer fans argued it was a great idea, bringing a Super Bowl Sunday-like feel to the sport of soccer.

Following the historic run ending in the USWNT’s fourth FIFA Women’s World Cup title, debates exploded across news and social media platforms, calling for equal pay between the men’s and women’s teams, despite a vast difference in performance.

Since the launch of the women’s World Cup in 2001, the USWNT has medaled every single time, winning half of the titles.

The men’s pre-World War II bronze medal run is the only time the United States men’s team made it to the podium at a FIFA World Cup. It was in Uruguay in 1930.

Amid public criticism of the pay gap between the two teams, U.S. Soccer President Carlos Cordiero released a statement breaking down the pay structure differences between the men’s and women’s national teams, alleging the women actually have the potential to make more money than the men.

This was met with a response made by the Men’s National Team by way of the United States National Soccer Team Players Association, stating that the governing body often “downplays contributions to the sport when it suits them.”

Podcast: The USWNT lawsuit a big step for pay equality