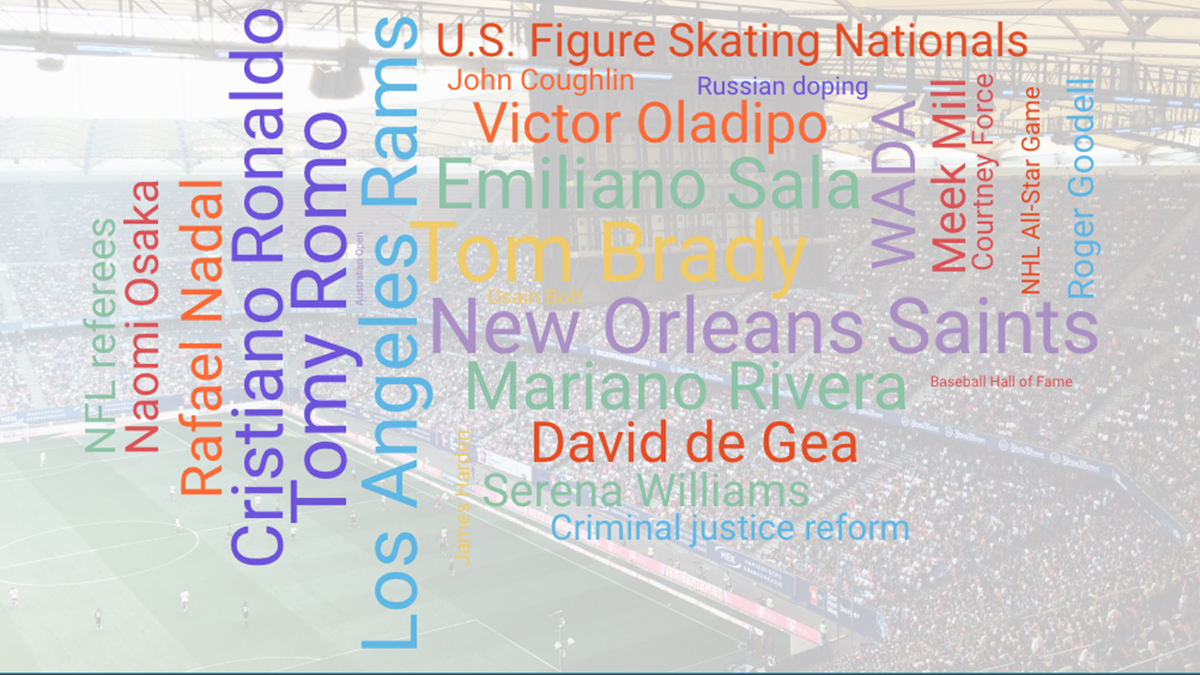 After 80 hours of flying time between three planes and five helicopter, two lifeboats searches and over 24 hours of continuous search time, the search for the missing plane carrying Argentine soccer player, Emiliano Sala, has been called off. Police said "the chances survival at this stage are extremely remote."

Usain Bolt crosses the finish line of his athletic career

After attempting to become a soccer player, the club could not find a way to pay him to play, Usain Bolt announced that his sports career is over and will now focus on commercials and business.

The Philadelphia 76ers, Brooklyn Nets and New England Patriots announced that they would be working with each other and rappers Jay-Z and Meek Mill in a battle to take on criminal justice reform. 76ers co-owner Michael Rubin says the group is going to donate $50 million to the effort. The group will be led by CNN host and activist Van Jones who once served under President Barack Obama.

No punishment for Russia over delay on doping data

Russia missed the World Anti-Doping Agency's (WADA) end of the year deadline to hand over 10,000 doping samples of Russian athletes. The samples were finally given; however, it has not yet been determined if the samples were tampered with. Despite Russia's initial insubordination, the WADA is not punishing the Russian Anti-Doping Agency unless it is later determined the samples are faulty.

Professional skateboarders had previously not been required to submit to drug testing, but that has changed since skateboarding has become an Olympic sport. The United States Anti-Doping Agency announced this week that Cory Juneau tested positive for THC, the primary psychoactive in marijuana, in January 2018. He was issued a six-month suspension. He is the first American skateboarder to be suspended for drug use.

John Coughlin committed suicide recently, after his participation in the sport being restricted by an anti-abuse organization.

Naomi Osaka, who rose to prominence during a match with Serena Williams that ended in Osaka winning the U.S. Open, was recently depicted by a manga artist in a tennis-focused book series with lighter skin than her actual hue, which some have called "whitewashing." This is an issue for many crosscultural artistic renderings and has put the focus back on Osaka's heritage and culture rather than the burgeoning young star's play on the court. Osaka is Japanese-Haitian.

Big League Chew bubblegum has announced that they will release a new package to stores featuring, for the first time ever, a female softball player on the package.