Garrett Broshuis was nervous when he picked up his fiancee from the airport. It was her first time visiting since he had moved to Connecticut to play Double-A baseball. His fears, however, had nothing to do with their relationship or with baseball.

“I was already worried about her seeing my (apartment) because the landlord hadn’t cut the grass the entire spring,” Broshuis said. “It was somewhat rundown, in a little rougher neighborhood.”

Additionally, the tenant above where Broshuis and a few fellow players had rented a tiny apartment had overflowed a toilet. It took the landlord a month to clean it up.

“We had mold all over our living room. We’re already sleeping on air mattresses without any air conditioning at all, and you add mold to the equation as well,” he said. “It was not a good living situation at all.”

Garrett Broshuis retired in 2009, but his story is common among minor league baseball players.

In a sport where top athletes make as much as $30 million a year – Arizona’s Zack Greinke leads the league at $34.4 million annually – and Major League Baseball revenues exceed $10 billion – many minor leaguers live either in situations like the one Broshuis experienced.

The 2017 Major League Baseball season saw remarkable revenue numbers, with league revenue hitting record highs of more than $10 billion. Despite media narratives that the game is dying, this was the 15th straight year league revenue increased.

According to Forbes, the New York Yankees franchise is valued at $4 billion, one of six franchises valued at $2 billion or more. Every team except Tampa Bay (at $900 million) was valued to be worth at least $1 billion. 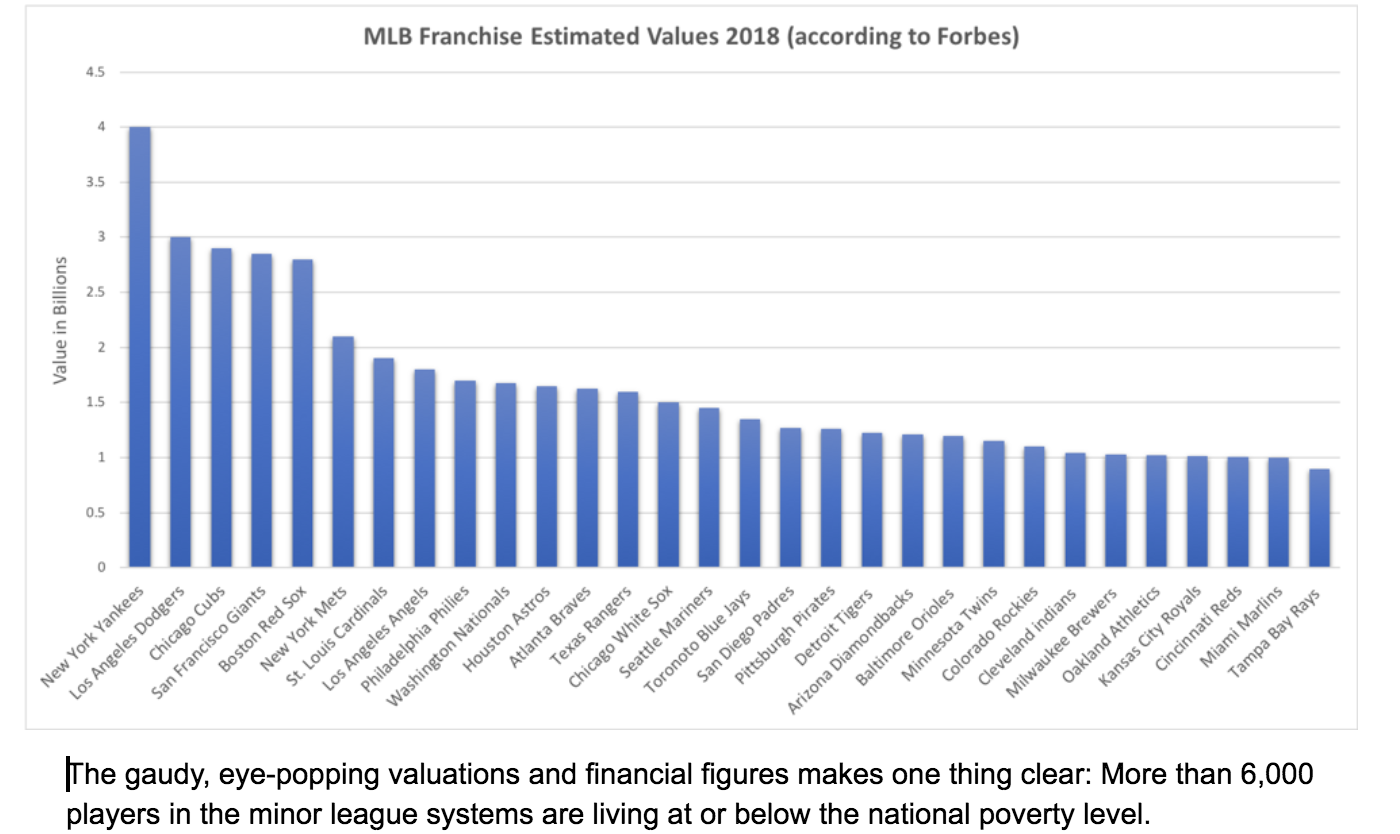 The gaudy, eye-popping valuations and financial figures makes one thing clear: More than 6,000 players in the minor-league systems are living at or below the national poverty level.

These minor-leaguers are playing a high stakes blackjack game with considerably worse odds. They’re gambling on themselves to make the big leagues – where the league minimum salary is $545,000 per year – but, only about 10 percent of minor-leaguers ever reach the majors.

To be fair, many minor-leaguers are working with more than the minimal $1,100 per month — the amount first-year players make. Based on draft position, teams have an allotment of capital in the form of bonus’ to sign drafted players. This past year, bonus pools ranged from $5.288 million for the Dodgers to $12.781 million for the Royals.

When drafted, players negotiate for their share of the bonus pool. For many, it’s the only real money they’ll have to get them through the minors. However, with 40 rounds in the MLB draft,  teams have to be thoughtful about how they allocate their bonus money.

For this year’s draft, the average first-rounder signed with a bonus over $3.4 million, according information from spotrac.com. By the fifth round, that number is around $350,000, and by the 10th round, $55,000.

“You don’t really talk about that stuff with each other. It’s just baseball,” said Joe Gillette, the Arizona Diamondbacks’ 36th round pick in the 2018 draft. “On the field it doesn’t matter how much you signed for.”

“You just kinda have to be smart with it, not buy dumb stuff,” said Blaze Alexander, the Diamondbacks’ 11th round selection in 2018. “Obviously buy a car, probably settle down after that. Put some in the bank and invest.”

Legally, the figures are befuddling. Working full-time (40 hours per week) at minimum wage ($7.25 per hour, federally) in the States, one can make over $15,000 per year. 29 states have minimum wages higher than the federal regulations.

Historically, Major League Baseball is exempt from the Sherman Antitrust Act, which prevents the fixing of prices and monopolies, but this doesn’t transfer over to other laws, such as wage and hour laws. The Fair Labor Standards Act set the federal minimum wage. Minimum wage and baseball is a legal murky ground, experts say, where baseball claims these players as a sort of artist, where if their art sells they make money, but if not, they don’t. The legality of this is expected to soon be tested in Congress.

A tiny throw-in to the $1.3 trillion spending plan signed into law by President Donald Trump in March was a one-clause tagged the “Save America’s Pastime Act,” which, regardless of the name, legally reinforces the league’s ability to pay minor leaguers less than minimum wages without any overtime pay.

With Trump signing the spending bill, Minor League ballplayers are now officially exempt from minimum wage and overtime pay. I’ll be getting some hard numbers around the business of the Minors for pay and benefits on Monday for @Forbes. Here’s what is now law. pic.twitter.com/OBEyeSqNlN

Broshuis enrolled in law school following his retirement from baseball in 2009. Currently he represents a handful of former minor-leaguers in a lawsuit against Major League Baseball claiming a violation of wage and overtime laws. Broshuis is looking to apply basic minimum wage laws to minor league baseball players.

“What we’re basically saying is ‘If you’re asking people to attend spring training and to work seven days per week for a full month, well you need to pay them for that,’ ” Broshuis said. “No other industry in America thinks about requiring their workers to do a full month of work, then just not pay them at all. It just doesn’t make sense. It’s illegal.”

Many teams have implemented systems of “host families,” community members who will voluntarily take in a handful of players for little or no cost to the players. The only thing the host families get in exchange is season tickets to home games.

“Those folks are incredible that take you in,” Broshuis said. “They’re inviting a random stranger into their home and providing them a place to sleep, providing them food, and a lot of times charging not much if anything at all. At the same time, from a player’s standpoint, I was still sleeping on a futon in someone’s basement usually.”

A host family situation can be far ranging — anything from a bunch of players sleeping on futons in the basement — to players living in extra rooms at fans’ houses in the community. Ultimately, you’re living lavishly if you happen to get an actual bed and the privacy of your own room every night.

“I actually got really lucky and had a really amazing host family. Literally after probably a week of staying there, I felt like they were my family,” said Matt Antonelli, who played seven years in the minors for 11 different teams. “They had two younger daughters who became like my sisters after a while. They were great.”

With the rise of sports science and smarter training and recovery methods, it’s well documented how much sleep affects performance. Sleep deprivation has even been proven equivalent to alcohol intoxication and is linked with increased injury risk in athletes.

In an industry built on player performance, and with players’ individual careers tied into how they perform at each level of the minor league systems, having a setup where the players are spending night after night on futons without privacy seems to contradict that.

“Why is a $10 billion a year industry asking residents in a community to take in professional baseball players instead of just paying them enough money to actually afford a decent apartment?” Broshuis said.

The family and dating life

The math is simple: $1,100 per month multiplied by a five-month schedule equals $5,500 compensation for the season (on top of the previously mentioned bonuses). Most players need to supplement the income. Nearly all of them will take on offseason jobs.

Finding a second job is difficult due to seasonal obligations to baseball and the need to stay on top of training in the offseason. Broshuis gave pitching lessons and worked in a psychology lab and at a gym during his six years in the minors.

“The last couple years of playing I was married, and I was certainly relying on my wife a lot,” Broshuis said. “When it came time to pay the security deposit on our apartment at the end of spring training, well I had just worked an entire month without pay during spring training. So how do I do that? I ask my wife to pay for that.”

When the Diamondbacks draft a player, he goes into rookie league ball at the Arizona League, playing games in what equates to a larger little league field. There are not even bleachers. For that summer, the Diamondbacks put the players up in a local hotel, two to a room. As one can imagine, dating with roommates is tough. Dating while living in with host families is even harder.

“When my girlfriend would come out I would usually stay in a hotel with her. My host family said ‘Just stay at our house.’ Some families might not be comfortable with that,” Antonelli said.

According to Antonelli, the awkward often becomes the norm. Players get used to living with roommates who are dating. There’s really no way to get around it.

“I mostly just use the signing bonus,” Alexander said. “The bonus helps out the 20 bucks.”

On the road, minor-leaguers often are allotted about $20 a day, in cash, for food. For most teams, the money comes up front. A six-game road trip equates to six, $20 bills at the start of the trip. For reference, most major league per-diems exceed $100 per day.

Players with large enough signing bonuses like Alexander often use that money to supplement the per diem, because as Antonelli said, “There’s really no way to ration it out.

“The meal money would go towards one meal. There’s a lot of guys who didn’t have a large signing bonus and they had to make that $20 last a long time. Guys would eat a lot of fast food,” Antonelli said. “A lot of the Latin players would get yelled at because on the road they’d buy groceries and try to turn the bathtubs into ovens to save money. I don’t know how they did it.”

Many hotels have breakfast but some don’t. Most teams provide pre-game meals, but often it’s just peanut butter and jelly or lunch meat for sandwiches. When the hotels have free breakfast, it’s a bonus. Many players get their free breakfast and take extra food back to supplement their lunches, which often consist of fast food.

“The eating habits are really poor, which is crazy to think for professional athletes,” Antonelli said. “A lot of guys eat McDonald’s a lot because you can spend three or four dollars and make your money go a long ways.”

Occasionally, a minor-league clubhouse will see a player from the MLB roster roll through while recovering from injury. It’s standard practice for major-leaguers to buy the team dinner or cater something from a real restaurant at least once during their stints in the minors.

These players know the struggle that accompanies the journey. For some, it’s all worth it. Gillette won’t be able to stretch his $2,500 bonus very far, but for him “It’s just fun, man. You’re just out here playing baseball.”

That may be the mindset for a 22-year-old like Gillette, but eventually you have to make enough money to support yourself. The odds of making it to the big leagues are not in the players’ favor.

In reality, most minor-leaguers retire before ever stepping foot in the MLB clubhouse, but in the eyes of these youngsters, the struggle can all be validated by the end game.

“I guess that makes the grind much more worth it,” Alexander said. “You make it to the big leagues and you get that paycheck.”