Sports fans worldwide are familiar with the idea of home-field advantage in the postseason.

The team with the better record begins and ends a playoff series at home, with their rabid fans cheering them on. Players get to sleep in their own beds. Get ready in their own locker room or clubhouse. Have their family around them.

But does home-field advantage translate into postseason success?

As the hockey playoffs begin, we look to see if the team with a home-ice advantage really does have an edge. Yes, if you consider the fact that the home team has the luxury of the last change which allows the coach to see what the opponent is doing and then match up accordingly.  This can be very advantageous from a strategic standpoint in a close game.

You can also factor in the home crowd as fan support is always a benefit. Plus, there is the added bonus of sleeping in your own bed and being in familiar surroundings.  Although, this last point may also serve as a disadvantage as the demands of friends and family can wear players down.

But what do the numbers say?  Looking at hockey results in the playoffs over the last 10 years, home-ice advantage certainly comes into play if you look at which teams come out on top. More often than not, the team with home-ice advantage has won the series. It’s particularly relevant in the Conference Finals and Stanley Cup Finals.

However, the home team doesn’t necessarily win a series by winning at home. In four of the last 10 seasons, 60 percent to 70 percent of the elimination games of a series were won on the road.  And, through the course of the playoffs in 2012, only 39 percent of all playoff games were won on home ice.

That season was an anomaly, however. In nine of the last 10 years, the percentage of playoffs games won at home has hovered between 50 percent and 60 percent.  It’s not an overwhelming amount, but enough to give the home team a boost.

As the above numbers reveal, winning at home is no guarantee, but having home-ice advantage is definitely worth playing for in the final stretch of the regular season. And, if a team is lucky enough to make it to the Conference Finals, they have a 75 percent chance of winning, and then after that, a 70 percent chance of taking Lord Stanley’s Cup with the home-ice advantage.

Certain venues across the country are revered for the effects they have on opposing teams. Ohio State's Horseshoe, Kansas City's Arrowhead Stadium and Kansas's Allen Fieldhouse are a few that are frequently mentioned as the toughest to play in in their respective sports.

Although home-court advantage is certainly desired in the NBA, it is not as important as it is in other sports. Multiple factors have impacted this over the past decade.

Win percentage of home teams in the playoffs is slightly skewed over regular-season home win percentage because the better team gets more home games (by  the nature of seeding in the playoffs). But, winning at home has been declining in the regular season as well. It dropped to 53.7 percent at one point in 2015, according to ESPN.com.

The statistics show that home-court advantage is becoming less relevant in the NBA, so why? The answer is complex. 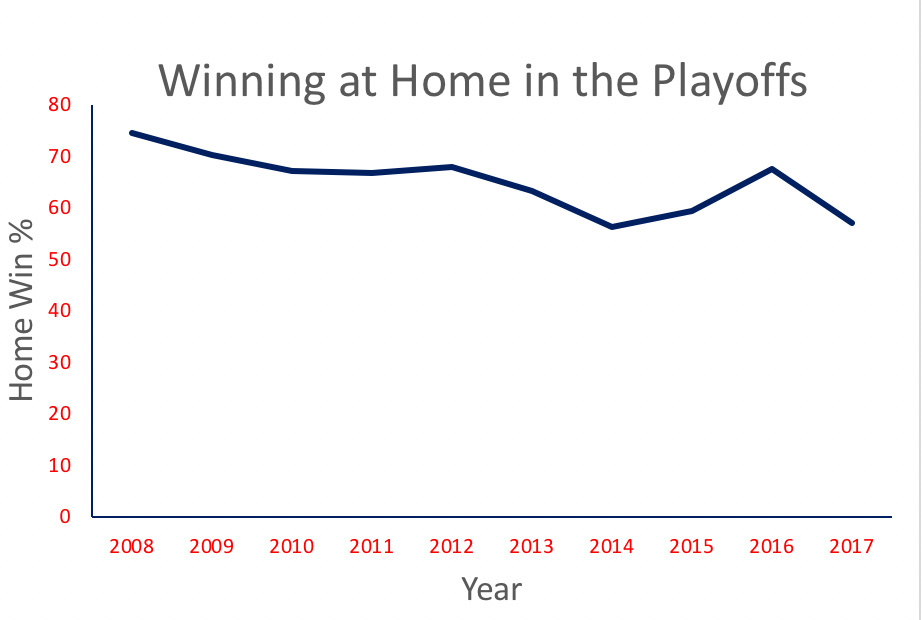 The last time the home teams had a win percentage of over 70 percent in the NBA Playoffs was in 2008. Coincidentally this was shortly before LeBron James left the Cleveland Cavaliers for the Miami Heat, forming the first modern day “super team.”

A "super team" in the NBA can be considered one with the most dominant players on the roster. Because of the caliber of players on last season's Golden State Warriors and Cleveland Cavaliers, prognosticators predicted those two teams would be in the NBA Finals before the season began. They were right. They had a combined 24-1 record in the playoffs last year as their paths trended towards each other. Including a 13-0 mark on the road.

These dominant teams are quite simply skewing the numbers. From 2008 through 2013, the league home advantage in the playoffs was 68%; since then, it has dropped to 60%.

Early-round series are competitive between the fourth and fifth seeds and three and six seeds. After all the numbers are just coming down from what used to be extremely high home-court win percentages at around 70 percent. Comparatively, the NFL home-field win percentage is  around 57 percent to 60 percent.

Other theories suggest that improved technology (making it easier to travel), a changing game (more 3-pointers) and a worsening home-court advantage (due to improved viewing options at home) are to blame for the changes. Moving forward it could become even easier to win away from home with reduced road back to backs helping out traveling teams.

The 2018 playoffs should be different than the past five or six years. The 2017 free agency period shook up the entire league, creating another power in the west, in the Houston Rockets. The Cavaliers dominance in the East appears to have taken a step or two back. The playoffs could be as competitive as ever. Will that affect the trends of teams winning at home in the playoffs less and less? We will find out.